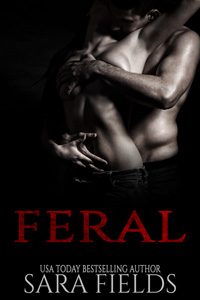 He warned me what would happen if he lost control. I didn’t listen.

He told me to stay away from him, that if I got too close he would not be able to stop himself. He would pin me down and take me so fiercely my throat would be sore from screaming before he finished wringing one savage, desperate climax after another from my helpless, quivering body.

Part of me was terrified, but another part needed to know if he would truly throw me to the ground, mount me, and rut me like a wild animal, longer and harder than any human ever could.

Now, as the feral beast flips me over to claim me even more shamefully when I’ve already been used more thoroughly than I imagined possible, I wonder if I should have listened to him…

He growled low in his throat, the sound turning into a purr that only functioned to make me melt before him. His small suctioned cock head had stayed attached to my clit, twisting and turning with my body no matter the position it seemed. The feathery tendrils tickled my clit hard, more persistently and it was with a very deep shame that I realized I was getting wetter even as he was spreading my ass cheeks apart and staring down at my forbidden channel. Dear god, what was wrong with me?

His fingers dipped down into my arousal, dragging it backwards as he rimmed it around my asshole. The moment he discovered my wetness, he purred loudly in excitement. I moaned, and he lifted my hips up so that I was on my knees, forcing me to present my naughty hole to him as a result. I moaned with my shame.

I struggled to maintain position and to not clench my cheeks together, but the moment he pressed his cock against my back channel, I tensed with fear.

He was going to fuck my ass.

Slowly, he pressed against me, and I fought against him, earning more than one hard, punishing slap to my ass until my bottom hole lost the battle against his cock. His massive head very slowly popped inside me, and it was enough to make me cry out in both shame and in slow burning pain as he took me as he pleased. Using me for his pleasure and ignoring my protests otherwise.

I felt every last inch of him enter my asshole, and despite my reluctance to even think about deriving pleasure from such a wanton act, inevitably, I felt myself rising up in ecstasy once again.

“No. Fuck. Please,” I begged, not really knowing what I was asking for anymore.

His hips began to rock back and forth, dragging his massive cock in and out of me slowly, steadily before beginning to increase in tempo.

At that moment, I knew whatever moment of clarity and temporary gentleness he had just had was now gone. His body temperature increased, and I heard his growl rumble deep in his chest, a sound I was now connecting with his arousal, excitement, and alpha nature.

Now, he was going to mount me. Fuck my ass as hard as he wanted, and I whimpered as his pace steadily built, faster and faster in my tight hole. I squirmed beneath him and the suction on my clit increased in pressure. I moaned as it teased me, forcing yet another orgasm to begin its ascent once again.

I fought it. I didn’t want to come while his cock was pressed deep into my asshole, but as the seconds passed, I knew that I wasn’t going to have a choice.

I moaned. I squirmed, and I whimpered, but blazing hot pleasure pulsed through my core. My wet greedy cunt squeezed around empty air, desperate to be filled as well.

He fucked me hard, rougher than before, and I could feel him losing control utterly and completely. He was like a savage, taking what he wanted, when he wanted, no matter what. His hips slammed into mine and had he not had a viselike grip on my waist, I would have shot forward. I could hear the loud echoes of our fucking and shivered with shameful desire.

2018-12-11
Chris
Previous: Becoming His Pet by Measha Stone
Next: Claimed and Mated: An Alpha Shifter Romance by Delta James