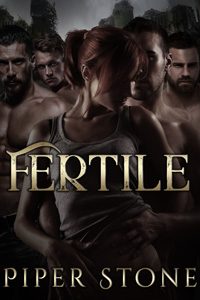 The men who hunt me were always brutes, but now lust makes them barely more than beasts.

When they catch me, I know what comes next.

I will fight, but my need to be bred is just as strong as theirs is to breed. When they strip me, punish me, and use me the way I’m meant to be used, my screams will be the screams of climax.

One by one, the three who’d been with Scorpio moved toward me. I was lightheaded yet aroused. I was ashamed yet excited. The dichotomy of feelings and sensations was maddening. Suddenly, hands were rubbing all over me, fingers digging into my skin. I could hear their ragged breathed, guttural sounds that seemed to float from every direction.

Fingers probed me, thrusting past my slickened folds, driving hard and fast. I gasped as they stretched me wide open, their plunges becoming ruthless, even brutal. More fingers slid down between my ass cheeks, wiggling until they found my dark hole, penetrating me as if I belonged to them.

The level of excitement was exhilarating, creating another wave of heat between my legs. I was shaking all over, moaning as they continued exploring, driving me to the point of climaxing. I couldn’t do this. I didn’t want this.

But with every touch, every hard thrust of their massive fingers filling me, fucking me, I was thrown closer to utter nirvana.

“Oh, yes… I…” My mind was a blur, an almost desperate need rushing to the surface. I knew I’d been freed from my shackles even as hands held me down, caressing and rubbing.

Diesel’s fingers gripped my hips and I was yanked back, my pussy impaled by one thick, throbbing cock. “Oh!” I slapped my hands on the bench, arching my back and panting like some wild dog. I could hear the huntsman growling as he thrust in rapid succession, only this wasn’t Scorpio. They were all taking me.

They were all claiming me.

His scent. My mate. The man who owned me.

The words were all jumbled in my mind as Scorpio stood in front of me, his massive arms crossed, the look on his face stern and penetrating. He’d given them permission to take me.

The thudding of boots continued as one cock was replaced with another, the force driving me up from the bench. As skin slapped against my bruised and aching ass, I whimpered, even as the rush of current became explosive. Pain and pleasure mixed together, leaving me breathless, riddled with shame from the raging fire burning within me. I was crazed with desire. How could this be?

Rock’s hands cupped and squeezed my breasts, thick fingers pinching my nipples. This time the pain was exquisite. “Oh, yes… So… good.” Every part of me was wet, the desire all consuming.

Montana was brutal in his mannerisms, taking me by force. Then he simply stopped, leaving me panting, unfulfilled. I whimpered, tossing my head from side to side before Rock’s hands gripped my hips, his hand shoving one of my feet onto the bench. His fingers slid between my thighs, the tip of one finding my clit.

I was lost in the pleasure as he swirled his finger around and around in lazy circles, bringing me closer to the most powerful orgasm. He shoved his fingers inside, pumping several times. Those same fingers smacked my pussy over and over again, stealing my breath.

“Uh. Uh. Uh.” I realized my guttural sounds matched theirs, beasts of the forest. Everything was surreal as I dared glance at the others. They were ravenous with need, bulges appearing between their legs. Would all of them take me? Would I endure this every day?

I bit back a series of moans as Diesel’s massive cock slammed into me, even larger than the others before. A series of lights flashed in front of my eyes as he fucked me, his long hair dangling against my back.

Another wave of humiliation blanketed me, forcing me to close my eyes. This wasn’t how things were supposed to be. Then again, nothing could ever be the same.