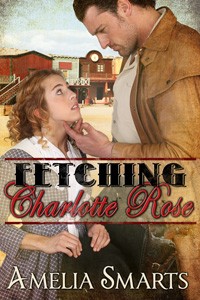 As soon as she steps off the train into the hot western sun, Charlotte Rose wonders if she has made a mistake. Leaving Boston to take a job as the schoolmarm of the small town of Weston, Arizona had seemed like a good idea, but the man sent to fetch her from the station almost changes her mind. The handsome but uncivilized brute who introduces himself as Max Harrison not only calls Charlotte by her first name, he even demands that she change her outfit.

Her humiliation is complete when, after ignoring his advice to put on something more suitable for the summer weather, she faints from the heat. To her utter shame, Charlotte is forced to endure being undressed down to her underthings to cool down, and worse still, Max warns her in no uncertain terms that any further foolishness will earn her a sound spanking on her bare bottom. Yet somehow, despite his threat to chastise her in such a barbaric fashion, Charlotte cannot deny that being in Max’s presence sets her heart fluttering like nothing ever has before.

Though she may be the feistiest woman he has ever laid eyes on, Max finds himself longing to see more of Charlotte—much more, in fact—and when he discovers that she feels the same way, he sets about courting her. But Weston is a very different place from Boston, and Max makes it clear to Charlotte that he will do whatever needs doing to keep his girl safe, even if that means taking her over his knee for a good, hard spanking as often as her behavior warrants it.

Charlotte’s love for Max grows deeper with each passing day, but she cannot help wondering if he sees her as nothing more than a silly girl in need of his constant protection, and matters come to a head when a violent, hateful man with a grudge against Max seeks to disrupt their lives. Will Charlotte’s pride be her undoing, or will she finally get the chance to prove herself to Max?

She offered no resistance as he stripped her to her shift and removed all but one petticoat, which he mercifully left on her body. He removed her shoes and stockings, and she felt relief when the air touched her toes. He poured water from the canteen over her face, neck, and along her arms. He did the same to her feet and legs up to her knees. As her body felt relief from the anguish, her mind became anguished over the humiliating situation.

He soaked his bandanna and tied it loosely around her neck, then slid an arm under her shoulders and lifted her to a seated position. He held the canteen to her lips, and she drank a few sips. “Drink some more,” he ordered, and Charlotte obeyed.

“Feel better?” he asked, his eyes boring into hers.

She nodded and averted her eyes from his penetrating stare. With her arms, she covered her chest, which was as good as naked. The water he’d poured on her had rendered her thin white shift transparent. She hung her head. Max stood, retrieved her bag, and located her lighter dress. Handing it to her, he said, “Put this on, then take off your petticoat from under it. We’ll be on our way after that.” He dropped her bag and walked to the other side of the buggy to give her privacy, which would have been laughable after he’d seen her stripped to her underclothes, if it wasn’t so humiliating.

Charlotte felt knocked down more than a few pegs, but she still didn’t like being told what to do, especially about her own clothing. The least he could have done was explain to her politely what he thought was best instead of ordering her around. He might also have asked before rummaging through her personal belongings to locate her other dress, and he might have placed her bag on the quilt instead of dropping it in the dirt. Insufferable man! Her ire toward him returned as she stood and slipped the dress over her shoulders.

Upon buttoning the last of the buttons up to her chest, she addressed him in hesitant tone, knowing her words would displease him and unsure about the wisdom of doing so. “I will leave my petticoat on, Mr. Harrison. This dress is improper otherwise.”

For an awful moment, there was no sound or movement. Then she saw his shadow appear near the back of the buggy and shortly after Max himself approaching her, wearing a fierce scowl. He stopped a horse length away.

“Foolish woman! If you possess a lick of sense, you will remove your petticoat. Then you will obey any other order I give you from now until I get you home. Give me any more trouble before then, and I’ll turn you over my knee. And so help me, there won’t be a petticoat, or a dress, or anything else between my hand and your high-and-mighty backside when I spank some common sense into you.”

“Oh, but I would, Charlie.” He moved a step toward her. “Maybe I ought to smack your bottom a few times right now to prove it.”

2016-01-30
+admin
Previous: A Gift for the King by Sara Fields
Next: Shared by the Barbarians by Emily Tilton