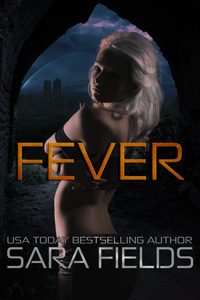 I thought I was in control. I was wrong.

I’ve led the Omegaborn for years, but the moment these brutes arrived from beyond the wall I knew everything was about to change. These beasts aren’t here to take orders from me, they’re here to take me the way I was meant to be taken, no matter how desperately I resist what I need.

Naked, punished, and sore, all I can do is scream out one savage, shameful climax after another as my body is claimed, used, and mastered. I’m about to learn what it means to be an omega…

Publisher’s Note: Fever is the third book of The Omegaborn Trilogy. It includes spankings and rough, intense sexual scenes. If such material offends you, please don’t buy this book.

He took his fingers and played with the arousal seeping from my entrance, and then drew it backwards, up toward my bottom hole. He circled it with his thumb, spreading my wetness around my tight rim even as I protested against it.

“No, don’t,” I begged, but he didn’t listen. He didn’t care that I was ashamed. He was going to touch me there because he wanted to. I whimpered and still he circled my tight little hole, teasing me and taunting me. He spread my cheeks even wider and I whimpered softly, unsure if I wanted him to take me there as much as he did.

My pussy tightened, the residual effects from my delayed gratification coming back with a vengeance. My clit pulsed, throbbing with need and intense desire.

Then Ethan pressed one thick finger against my tight hole. I tried to tighten my ass, but it didn’t matter. He was relentless and no matter how much I fought against him, he had decided to take my ass, so he was going to do it. His finger breached my little hole, my slick easing his way inside and I gasped.

It felt so wrong. So dirty and filthy and so incredibly humiliating. The feeling of having something press into my bottom was unnerving, but something about it left me throbbing with desire. I bit my lip, humming with shame. He pushed one thick knuckle past my tight rim, and I moaned softly, grateful for the fact that I could hide my face with my long silver hair. I could feel a blush creeping up my face and the blood heating in my veins.

I didn’t want to admit it, but the feeling of his finger in my asshole was arousing. My pussy pulsed with arousal. Fresh slick dripped down my inner thighs, an obvious sign of my desire that all three alphas could see.

“You like it when I torment this naughty little hole,” Ethan said, his tone dark and dangerous, yet I knew he was right.

He pushed his finger in further, dragging it in and out of my bottom hole as he wished. My back arched slightly, easing his entry just a little and he chuckled knowingly.

His digit stretched my tight hole just a little and the sensation burned slightly, a gradual ache burning through my body as he teased me. I moaned quietly, my flesh simmering with want. Desire vaulted through my body, the ball of desire in my core clenching tightly and I sighed with pleasure.

Then Ethan added a second finger.

I cried out as a flash of pain tore through me, the stretching sensation all that much more intense now. It hurt, but in the most delicious way that only served to arouse me further. I trembled beneath him, quivering with need and agony at being taken in such a shameful way.

He pulled his fingers out and pushed them back in, over and over again until I was breathless with desire. I felt my passion blazing inside me, bubbling over like molten lava and it soon took over my every waking thought.

Then he added a third and I cried out at the feeling. It hurt more than I had prepared myself for. My muscles stretched, the pain my central focus for a long agonizing moment.

“Quiet, omega. You’ll take what I give you. Soon enough, you’ll be taking my cock in this tight little hole and that’ll be much bigger than just my fingers,” he said, and I moaned pitifully in response.

2019-08-18
Chris
Previous: Harvest: A Dark Sci-Fi Reverse Harem Romance by Piper Stone
Next: Enslaved for Their Use by Ivy Barrett