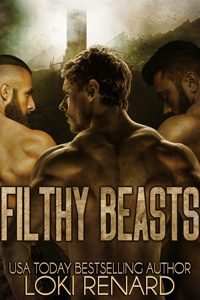 They told me the men who live on the surface were filthy beasts. They were right.

For a highborn daughter of the great tower, never touched by the hands of a man, there is no greater shame than exile to the surface. I was told that the brutes who dwell amid the ruins of the old world would do unspeakable things to a girl like me, that if I were left at their mercy my virgin body would be shared among them and used more roughly than I could possibly imagine.

I didn’t listen. I defied the sacred laws of the tower, and I was banished, cast down to be claimed by the savages beneath. But as they ravage me over and over, every desperate, devastatingly intense climax makes it more clear that there is one thing the elders did not warn me about.

They didn’t warn me that before long, I would beg these filthy beasts for more.

“Her ass will be tight, it is unused, and it deserves punishment. This girl who sneaks about in the night to have her cunt serviced should not go unpunished. Do you want me to wake Ragnar? Or shall I fuck her bottom instead?”

“Fine,” Ein says after a moment’s thought. “You can fuck her ass. But do it slowly. She’s delicate.”

“Oh, I know she is,” Kodak rumbles as he steps in to replace Ein behind me. The difference is immediately noticeable. Not just the feel of the man, but his presence. Ein is like me, but Kodak is completely wild and foreign. I barely know him, but that will not stop him entering me and using me as he desires.

I try to squirm away, but Kodak has hold of me, keeping me over the trunk.

“That’s the wrong hole!” I complain as his fingers run between my lower cheeks and two of them rub against the part of me that is so shameful I never thought to think of it until now.

His fingers pull the wet desire left in Ein’s wake and rub it against the tight bud. I can’t believe he is going to put his cock there. I can’t believe there will be any chance of his rod fitting there. I don’t know why he even wants to. I understand none of this, but he is taking me anyway, his middle finger plunging inside the tight ring of my bottom.

“You two can’t help yourselves, can you. The more you’re told to stay apart, the more you want to be together. Ragnar should know better than to forbid young love.”

His finger is thick and strong, and as it sinks inside me, I feel little tingles of excitement rushing through me. It is utterly shameful being treated this way, and even more so to be enjoying it. Interrupted halfway through sex, I am already primed to want his touch. These four men have trained my senses to accept all manner of sexual exploration. No matter how rough, or unexpected, or punishing, it always ends in orgasm.

He pulls his finger away, and his massive body rears over mine, his big animal hands spreading my cheeks. He rubs the head of his hard rod against the tight wet hole of my ass. I squeal as his cock pushes into my bottom.

It’s happening quickly. Too quickly. I’m not ready. I’m not…

“Not too big,” he says. “Your ass will stretch out for me. You might even like it. You like being fucked dirty. Your cunt is soaked.”

It’s true. The more he ignores my cunt, the wetter it gets. I could take a rough fucking right now in that hole, but Kodak doesn’t care about my pussy. It’s my ass he demands.

His big hands drag me down on his dick as he starts to fuck the entrance of my ass, making me feel him enter, and then leave, over and over again. I grunt and moan and make the most animal of sounds.

One hand keeps me in place while the other reaches under me and strums at my clit. The touch sends fresh excitement through me, and makes it all the more possible to slide my ass back against his cock, accept the length of the monster inside me and take pleasure from the long thrusts that keep sinking into me. I am being punished and used at the same time with an expert touch that makes me simultaneously whimper and moan.

2019-06-08
Chris
Previous: His Human Subject by Stella Rising
Next: Tamed by Her Mates by Sassa Daniels