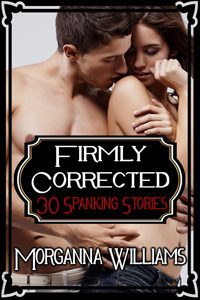 Firmly Corrected is a collection of thirty panty-soaking short stories featuring willful, naughty women who are soundly punished and thoroughly dominated by stern, handsome men, leaving them blushing with shame, quivering with need, and often begging to be taken long and hard.

Publisher’s Note: Firmly Corrected is a collection of short stories which include spankings and sexual scenes. If such material offends you, please don’t buy this book. Also note that these stories have been previously published on the author’s blog.

She lay on her back, spread wide open, her thighs tied to the foot posts with her butt hanging over the edge of the bed. A blindfold covered her eyes so she couldn’t watch and anticipate his actions. She was completely open to him and anything he wanted to do to her, a delicious shiver of anticipation slid through her at the thought and she knew her folds were glistening with arousal.

Then she felt him standing between her thighs, and something stroked lightly over her vulva, making her give a soft moan of delight that turned to a cry when it left only to return and deliver a sharp strike to the vulnerable area.

It was the small wooden spoon from the kitchen, she realized, as it began to slap all across the bare lips of her pussy, leaving stinging fire in its wake. “Aaaahhhhh… ooohoo… ahhh.”

The slightly wet popping sounds stopped for a moment and she waited, almost holding her breath for the next swat. But instead, gentle fingers slid over her stinging skin then parted her folds to delve into her wetness. Fingers fluttered softly over her clit then teased the opening of her hungry channel. Soft whimpering moans of pleasure came from her as he teased her and then with a shock, another hard swat landed, making her yelp in surprise.

This time ten quick swats peppered her tender flesh, making her legs automatically jerk against her bindings in an effort to pull them together. Then those clever fingers opened her folds up again and she sighed with remembered pleasure, only to cry out when instead of a teasing caress, the spoon slapped down directly on her swollen clit.

“Oooowwww!” she cried when it snapped down on her tender bud four more times. Then his mouth closed over her to suck her little nub deep as two fingers sank into her wet heat. “Ooohooo… yesss… ooohhh, please…” she cried, everything in her straining to press up to meet his mouth.

He worked her with his mouth until she was right on the edge of coming, then the spoon slapped down again and again, somehow the pain morphing into pleasure as he rhythmically spanked her swollen wet cleft, each swat driving her need higher and higher.

When three fingers slid deep inside her as the spoon struck down on her clit hard, she shot over the edge and came with a scream, her inner walls clamping down hard on his thrusting fingers.

“Good girl,” he said as he continued to drive his fingers in and out of her sore pussy in a pounding rhythm that felt so good, it was almost painful in itself. “Again.”

Then his tongue was flickering over her abused clit as his fingers drove in and out of her without mercy. He lifted his head and slapped her clit with two fingers. “Do you know what I’m going to do when you come, little girl?”

A shuddering moan escaped her. “No, sir.”

“I’m going to fuck this naughty little pussy hard,” he told her as he slapped her clit again before sucking it back between his lips and worrying it with his teeth. She exploded again around his fingers, her hips bucking helplessly against his face.