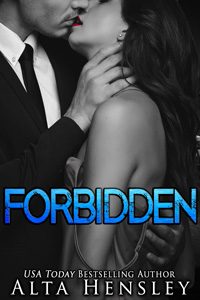 She is forbidden. She will still be mine.

Pure. Untouched. The daughter of my most loyal friend.

I shouldn’t have bared and punished her.

I shouldn’t think every day of tearing her clothes off and ravaging her.

But I did, and I do, and when I claim her it won’t be the gentle lovemaking she deserves.

Forbidden or not, she’ll scream my name as she learns what it means to belong to a man like me.

“No! Stop! Please! Anthony!” There was nothing I could do. I was over his lap, bare bottomed, in the house where I had once been spanked before. His hand—broad as a barn and hard as a plank of redwood—was descending over and over onto my well-rounded butt.

This wasn’t like the spanking before. I didn’t know why, but it wasn’t. Maybe because I knew this one was coming. Or maybe because in the depth of my soul, I secretly had wanted it. But whatever fantasies I might have indulged in regarding what being spanked would be like were nothing in comparison to the real thing. There was nothing I could do, nothing I could read—online or otherwise—nothing that I could have heard from someone about it that would have prepared me for what it was really like to feel two thick thighs beneath my ribcage, supporting me as his left arm lay lightly over the small of my back, trapping me in place as easily and naturally as could be. This was totally different than the last time. Was it because I was different? Or maybe it was because the man issuing the punishment was different… different to me. Whatever the reason, this spanking felt like something I had never experienced in my entire existence.

I had never felt more vulnerable in my life. It wasn’t even so much the situation. It was that it was Anthony. It was Anthony who was actually delivering the spanking.

I didn’t know where to put the pain. It hurt at least a thousand times worse than any spanking I had ever received as a child or by him the one other time, and he wasn’t showing any signs of stopping any time soon. I wiggled and squirmed and tried to buck or arch away from him, but nothing was working—the only thing that I was positive about my future was that that hand was going to continue to distribute its pain all over my rounded bottom and down the backs of each of my thighs.

Those were the worst of all of them. Because of the size of his hand and how little acreage there was back there, he had easily gone over the small territory of my butt once and was ending up having to spank the same place several times, but the worst swats were still on the backs of my thighs, or that tender area just at the crease of my bottom. It was atrocious, and I wasn’t at all sure I was going to survive it.

But just to prove me wrong on how awful I thought the spanking was, Anthony paused the punishment and moved his hand to the juncture between my thighs. He dipped a finger into the crevice and ran it along the wetness of my pussy. Intense humiliation filled me as he coated his finger with my arousal from the spanking. My body betrayed me in every way as I nearly moaned as he touched me in the most intimate of ways.

I held my breath as I waited for what would come next.

I wanted his finger to press inside of me. I wanted so much more than what he was doing. My pussy got wetter as he circled my clit with his fingertip and dipped back into the folds again. My body tensed, but not because I hated what was going on, but because I was afraid of showing just how much I was enjoying it and craving more.

But just as quickly as he had surprised me by placing his finger at the entrance of my pussy, he moved his wet finger to my anus and pressed firmly.

“Submission is part of discipline,” he said huskily. “Humility mixed with some shame.”

I gasped as the tip of his finger breeched my tight hole. The sting and the shock caused me to buck against his hand, which only drove his finger a little deeper into my ass.

“Anthony,” I barely whispered, not sure if I wanted to beg him to stop or beg him to continue on.

“A spanking isn’t the only way to punish naughty girls.”

2019-11-03
Chris
Previous: Taken by the Commander by Stella Rising
Next: Carried Off: An Alpha Shifter Romance by Raven Willow