The Forbidden Castle by Dinah McLeod 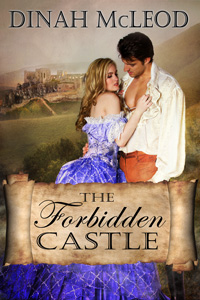 Aimée has hoped for Geoffrey to make her his wife for as long as she can remember, and though he treats her with contempt she remains determined to win his heart. When Geoffrey sends her on a journey to bring back a woman he wants for himself, Aimée sets out to do his bidding. But the trip does not go as planned, and after losing her way—and her horse—Aimée takes refuge in a stable for the night. The next morning, she finds to her shock that she has stumbled upon a dark, forbidden fortress rumored to be inhabited by a terrible beast.

Upon being discovered by Aldéric, the castle’s stable master, Aimée does her best to explain her presence. But after catching her in a lie, Aldéric scolds Aimée and, to her great shame, chastises her firmly. Yet Aldéric’s gentleness after her punishment surprises Aimée, and she cannot help enjoying his attention and wondering why it is that this stable master treats her with a kindness Geoffrey has never shown.

But the fortress is a dangerous place, and soon Aimée falls into the hands of a man who knows nothing of gentleness. Can Aldéric save Aimée from torment in the dungeons, and if he does come to her rescue, will he be able to forgive her when he discovers the truth about her presence at the castle?

“There is no sense in struggling.” His voice was calm, in stark contrast to how I was feeling. “Come, now, mademoiselle, let’s get this unpleasantness out of the way.” Yet, something about the way he spoke, combined with the glint in his eyes, told me that he didn’t find it unpleasant at all.

“I fear I shall be ill,” I mumbled, my lips hardly moving.

“It always feels like that, the first time,” he assured me in a voice that was suddenly soothing. How could he go from sounding so stern to comforting so quickly?

“I’m afraid.” As soon as the words slipped from my mouth, I hated myself for admitting to such weakness. I dropped my eyes so that I would not have to see his face and prayed that he would get this over quickly so that I could leave.

When I felt the feather-light touch of his hand caressing my cheek, I couldn’t help but meet his eyes. “I will not tell you it won’t be painful, Aimée, for it will. I will tell you that while I intend to impart a memorable lesson to your backside, I won’t leave any lasting damage.”

It wasn’t the words he said, but rather that he’d called me by my name that helped me relax. I gave him a nod, though I didn’t try to speak. I feared if I did, I would begin to sob from the fear overtaking me.

“Now, I will go and turn this handle and…” He trailed off as he went to the contraption and began to turn it as he said.

I watched him for a moment, my brow furrowed, when I felt myself being lifted off the ground. My feet dangled and I let out a little shriek of surprise.

“There is a locking mechanism here,” he explained, though I couldn’t see it. “That will keep you where I want you.”

“Why…” I trailed off helplessly. I was no longer pulling at my constraints for fear that I would plummet to the ground.

“Why do I have you suspended in the air? Because it keeps you from escaping and has the added benefit of allowing me to reach every bit of your delicate skin.”

I flinched, swallowing back a moan. I’d never thought to find myself in such a predicament and I wasn’t entirely sure what to make of it, so I reached for the first emotion I could find, which was fear. “Please,” I begged, though I knew it would do no good.

“No, my dear. You are quite a tiny thing and believe me, I’ve had occasion to put many a woman in the position you find yourself in right now, some of them much bigger than you.”

His words reassured me not at all, but made it clear that there was no way I would talk my way out of this. The only thing to do was to suffer it and hope that it could indeed be endured. It would seem that I had little choice in the matter.

I tensed as I felt him move behind me, but when his hands cupped my ass cheeks in a slow caress, I began to kick my legs, fight renewed.

“Settle down,” he murmured, in the same voice he might use with a scared filly. “This is going to happen whether you like it or not.” Of course he knew very well that I liked it not at all.

I could not calm myself, no matter how soothing his voice might be. When I felt his hands pulling down my pantalets, I yelped in protest. “Please, I beg you. It wouldn’t be proper for you to bare my bottom.”