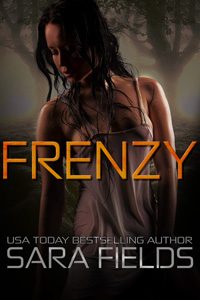 In the city, I belonged to no one. Here in the wild, I’m a lone female for a pack to claim.

Inside the walls I was a respected scientist. Out here I’m vulnerable, desperate, and soon to be at the mercy of the beasts and barbarians who rule these harsh lands. But that is not the worst of it.

When the suppressants that keep my shameful secret wear off, overwhelming, unimaginable need will take hold of me completely. I’m about to go into heat, and I know what comes next…

But I’m not the only one with instincts far beyond my control. Savage men roam this wilderness, driven by their very nature to claim a female like me more fiercely than I can imagine, paying no heed to my screams as one brutal climax after another is ripped from my helplessly willing body.

It won’t be long now, and when the mating starts, it will be nothing short of a frenzy.

Publisher’s Note: Frenzy is the first book of The Omegaborn Trilogy. It includes spankings and rough, intense sexual scenes. If such material offends you, please don’t buy this book.

“You’re mine, omega and I will use you any way I please,” he glowered, and I shivered. Would he fuck my ass like I’d seen the other alpha do? I shook my head. He couldn’t. It would be so shameful that I couldn’t stand it.

“Such a pretty little hole, just begging to be fucked,” he mused, and I shivered, trying to tighten the cheeks of my ass to hide myself from his perusal.

He slapped my ass hard and I whimpered, the sting from his prior punishment reigniting under his hand. He released the cheeks of my ass and grasped my hips, lifting me up so that my knees pressed against the wet blankets beneath us. He maneuvered himself behind me and I could feel the heat of his cock as it pressed against the vulnerable flesh of my backside.

“I’m beginning to think you enjoy being punished, little one. I think you like it when I make it hurt,” he whispered and I shivered, fearing that he was right. I’d never admit it though.

“No! You’re wrong!” I countered, but he simply chuckled.

His finger pressed against my asshole and he laughed quietly as I struggled beneath him. It felt so wrong, so entirely shameful for him to be invading me in such a manner that I couldn’t submit. I clenched my cheeks, trying to fight, but his finger pushed relentlessly against my tight rim. His digit was thick, and I was unused to anything entering my backside. A stretching, burning sensation pervaded my senses and I struggled anew, earning yet another slap to my already well punished ass.

“Please don’t,” I begged, but he didn’t listen. I should have known that he wouldn’t give into my pleading. He was an alpha and he would do what he wanted, even if I protested. Especially if I did.

Slowly, his finger breached my tight hole, sliding in and out and I moaned with my humiliation. My asshole clenched around it, feeling each knuckle as they began to stretch my forbidden channel. I keened against the intrusion, but it didn’t matter because shortly thereafter, he added a second thick digit.

My mouth opened in disbelief as he stretched me. The burning stretch increased two-fold and I shuddered beneath him. He purred low, the sound intermingled with a warning growl and I felt his power. At once, my body started to open for him. My asshole relaxed slowly as he fucked it with his fingers.

Then he added a third.

I couldn’t stop myself from crying out as pain pervaded every fiber of my being. Something deep inside me took that terrible ache and distorted it into a depraved, sinful sense of desire. I was beginning to feel aroused.

I whined forlornly. This couldn’t be happening.

But it was. My body was reacting to his dominance, was starting to enjoy this wicked act. My hips swung back and forth, meeting the thrusts of his fingers and the pain began to recede, morphing into a more powerful arousal that left me breathless with want.

Slick trickled down my leg and I closed my eyes, mortified. He’d know just how much I was enjoying this. There was no more hiding it.

His growl of approval told me that he could see all of my shame. His fingers pressed in and out of my tight hole then more ruthlessly and I groaned low in my throat, awash in pain and pleasure and something deeper.

The link between us quivered, blossoming in that moment. Thoughts of pleasing my alpha filled my mind and then it was all I wanted.

He removed his fingers slowly then and pressed the head of his cock against my back channel.

“I’m going to fuck this tight little hole and you’re going to scream my name as you come.”

2019-04-05
Chris
Previous: Her Alien Prince by Maria Monroe
Next: His Human Claim by Stella Rising