Don't Miss
Home / Blog / Given to the Daddies by Emily Tilton

Given to the Daddies by Emily Tilton 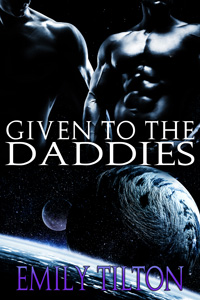 After police show up at her home and demand she accompany them, eighteen-year-old Dorana is taken to her planet’s capital to be trained for use by the Magisterians who conquered her world. Before long she has been stripped, punished for her defiance, and brought to a shameful public climax by the very man who just finished spanking her, but her humiliation is just beginning.

She is to be given to three firm-handed military officers, each of whom she will call daddy, and her beautiful virgin body will be theirs to claim and enjoy in any way they please. But as the strict, sexy soldiers set about teaching her all the ways a little girl can be made to blush, Dorana soon finds herself wondering what it would be like to belong to her new daddies forever.

Publisher’s Note: Given to the Daddies is a stand-alone novella in the Galactic Discipline series. It includes spankings, sexual scenes, and elements of age play. If such material offends you, please don’t buy this book. Also note that an earlier version of Given to the Daddies was previously published under the title Planet of the Daddies as part of a multi-author collection entitled Dirty Daddies: 2020 Anniversary Anthology.

He had called her sweetling. All the confused thoughts and feelings came rushing back, and she sobbed into the bench seat, feeling how the motion of her upper body made her tingling nipples brush against the synth-leather. It made her hips buck, and her bottom squirm, in a truly mortifying way—a way that moreover moved her backside in the opposite direction to the one Lord Jason had commanded.

“No,” he said in a voice that to Dorana’s surprise seemed less severe than sympathetic. Its gently scolding tone made the problem between her thighs, the sense-memory of his skillful hand there, worse.

But the lord deputy accompanied his no with a lifting of his right hand off her bottom and then, to Dorana’s sobbing sorrow and fearful cry, an increase of the pressure on her back.

She knew what would happen: she had learned it only a few minutes prior, over his lap. When Lord Jason used his left hand like that, on a girl’s back, and he lifted his right hand…

Dorana cried out, “Please, no!” just as she felt the puff of air from the Magisterian’s firm right hand. Then she heard the slap of his palm and fingers echo off the walls of the big, now empty room, and she felt its terrible sting on her right bottom-cheek. Combined with the terrible soreness he had bestowed there over his knee, it felt like a burning brand, and Dorana cried out again with the awful pain of old-fashioned bare-bottom discipline.

“I… told… you… sweetling,” Lord Jason said as he renewed her spanking in this even more humiliating position, “to… push… this… up.”

“Oh, no… oh, no… oh, no,” Dorana sobbed into the bench. Desperately she tried to do as her master-daddy had told her. She arched her back as much as she could and she tried to raise her backside, so that Heva and Welana would see her bottom and know that they never ever wanted to have a bare-bottom spanking of their own.

She felt their eyes on her, and she wondered what they felt, and she didn’t want to know, all at the same time. Dorana remembered how she had felt, watching the girls in the pretty pink dresses have to lower their panties, with their faces in this same bench. The knowledge that in two years it seemed she herself would be back here, with pink panties on, and she would have to take them down for everyone to see her pussy… her bare, smooth pussy… It made the sting in her bottom change, and move, so that she found she had to push her bottom up and out even further.

Then Dorana saw where her resistance came from, when the thought of what she needed broke upon her consciousness.

Then she heard Lord Jason’s voice, and she felt his hands, and she understood that he, too, knew the source of her defiance.

“Girls, please watch carefully. Dorana is trying to be a good girl, now, and good girls earn treats from their daddies.”

The Magisterian’s left hand moved around Dorana’s right hip, to take firm hold of her there. That made Dorana cry out, but what his right hand did made her shame herself so utterly that she felt sure she would faint. Lord Jason thrust that hand between her thighs, his fingers twining in the little nest of chestnut fur and his thumb pressing inside the soaking slit of her pussy. Dorana arched her back even further, and she felt her bottom work to the motion of her daddy’s urgent fingertips.

She simply couldn’t help it: the smart of the bare-bottom spanking… her position naked over the bench… the eyes of the other girls… Lord Jason’s smoldering gaze… Lord Jason’s hands… Dorana’s little pussy, crowned with embarrassing grownup hair… the pink panties, the smooth pink pussies, her bare little bottom raised over her daddy’s knee for an old-fashioned spanking…