Don't Miss
Home / Blog / Given to the Savage by Natasha Knight

Given to the Savage by Natasha Knight 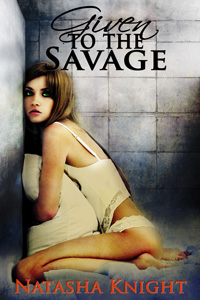 In the aftermath of a plague which brought civilization to its knees and left most of the world’s female population sterile, breeders—the few women who remain fertile—have become a precious commodity. Breeders live in relative comfort, but upon reaching adulthood they are tasked with bearing one child after another to carry on the species. Frequent medical assessments keep the breeders healthy and harsh punishments keep them in line.

As a breeder who has just come of age, Rowan knows she will soon be little more than a slave, but when she dares to resist her fate the penalty is severe. After a shameful, public chastisement and a thorough, humiliating examination to determine her suitability for child-bearing, Rowan is given to a savage from outside the community—a huge brute of a man named Silas—to be bred.

Against all expectations, Rowan finds herself drawn to her new captor. Brave, ruggedly handsome, and even kind at times, Silas is everything the men who enslaved her were not. When the time comes for him to breed her, despite the circumstances something deep inside her begs for him to take her long and hard. But while she soon finds herself longing to be his forever, Rowan knows that eventually those who gave her to him will try to take her back. When that day comes will Silas fight to keep her at his side even if it means risking everything he loves?

The doctor barely glanced at her as she asked for what she needed next.

“Bring me that crop,” she said.

The nurses were instructed to move away as the doctor took up the short riding crop. She gripped it by the braided handle and tapped the long, thin rectangular end against Rowan’s clit lightly. Rowan noticed instantly there were two sides to the split end: one soft fur, the other hard leather. The doctor alternated first rubbing the furry side over her clit then turning it over to slap it lightly with the leather. Rowan closed her eyes and tried to squeeze her knees together. It wasn’t that it didn’t feel good, quite the opposite in fact. And she wasn’t sure if she’d be able to hold the plug in place if she were to come.

“Nurses, take hold of her knees. I want her spread wide.” The two women moved into place as the doctor turned to Rowan. “Do you need a few strokes of the strap on your cunt first, breeder?” she asked.

“Dr. Nelson, watch her face and report the results, specifically her eyes. Her pupils will become round and large when she’s close to orgasm.” She then addressed Rowan: “You’ll be allowed to release your enema once you climax.” With that, she began whipping Rowan’s pussy. The sensations all collided together, the pain and sting of the crop over her already swollen clit, the pressure of the enema she held, the plug stretching her anus and somehow, the knowledge that she was being watched all worked together and as hard as she tried to keep from coming, to keep from giving them what they wanted, Rowan’s hips bucked beneath the ruthless crop and she tugged at the restraints on her wrists as she called out, closing her eyes and turning her head from side to side as orgasm overtook her every sense and she felt her muscles clamp down around the plug in her bottom and the gush of her own juices slide from her pussy.

“Orgasms are powerful,” Dr. Nelson said out loud. “Her eyes turned almost completely black before she closed them.”

The lead doctor smiled and nodded. “Good, that means she’s very fertile. We’re almost done here. Let’s get her emptied and we can proceed with her rectal exam.”

Rowan opened her eyes slowly only to meet that blue gaze of the savage who stood watching. Her face heated to a dark red as she realized he had seen her orgasm. He wouldn’t look away and so, finally, she lowered her lashes, embarrassed and angry with herself for her lack of self-control, for giving them what they wanted.