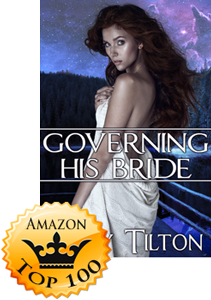 ★★★★★ Laurel @ Amazon.com “Fascinating World by Emily Tilton” on June 11, 2016
Oh my goodness! I had to read this highly erotic book in from of a fan. It takes place on a world similar to earth in the Victorian era. Three classes of people, the upper wealthy class, the practical class and the servants. There were many pre marital sessions where the young lady’s were examined butch externally and internally. They were fitted with a device that controlled then sexually. The device was called a governor. They were trained to give pleasure to the male and he sometimes gave her pleasure and sometimes did not. There was much discipline, somewhat harsh also controlled. There was a fourth group called renegades. They lived like the Native American. They made their own clothes, hunted for food and were free and did not have governors. The government wanted to round them up and exile them so their ideas could not be passed on. This was such a fascinating world that it was totally believable.

★★★★★ SH @ Amazon.com “Sizzling HOT” on June 13, 2016
I really enjoyed this book, was hooked from page one and couldn’t put it down. Another great, smoking hot story from this author which comes as absolutely no surprise. The plot is quite different, and that’s putting it mildly, ahem 😉 but oh, so interesting. Grab a fan, a tall glass of ice water, maybe a fire extinguisher and settle in for a wonderful read. You’ll be happy you did! I received this book from Stormy Night Publications as an Advanced Reader Copy.

★★★★★ robyjean @ Amazon.com “Great Read” on June 16, 2016
Okay to say this book is hot is truly an understatement. From the premarital examination and sessions, to the encounters with the renegades to the day to day life of the couple-each of the encounters was steamy, eye opening and page turning. The governor is a device fitted to the bride to help regulate and control her pleasure. The society is filled with rules and gender distinctions and had a sexy puritanical feel to it. All in all it drew me in, fascinated me and kept me reading straight through. The writing helped to make the story completely believable and thoroughly entertaining. I received an advanced copy of this book from Stormy Night Publications in return for an honest review.