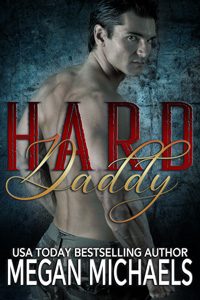 Mace Cardelli is not the kind of man who stands by while a woman is in danger, so when he sees a mobster threatening an innocent college student he doesn’t hesitate to intervene. But gunning down a member of a mafia family won’t go unnoticed, and the girl will need his help, whether she wants it or not. If that means bringing her home with him and taking his belt to her bare bottom when she puts herself at risk with her reckless disregard for his instructions, then so be it.

Kyleigh Pizzulo isn’t sure what to make of the former Navy SEAL who saved her life and then insisted on keeping her under his protection, but there is no denying her helpless arousal when the battle-hardened brute spanks her until she is sobbing, and before long she is screaming her submission into the sheets as one brutal climax after another ravages her naked, quivering body.

Though she would never have imagined it possible to feel so roughly used and yet so deeply satisfied at the same time, it is only when Kyleigh is left bound and on display with her tears and his seed dripping down her face that she understands just how thoroughly and shamefully Mace plans to master her. But can this beast who makes her call him daddy keep his feisty girl safe?

The sound of leather snapping through the belt loops of his pants had her stiffening, her buttocks clenching. She watched him double it over, palming the buckle, and he wrapped the leather around his hand, leaving a long wide strip of leather dangling. Pressing his warm hand into the small of her back, he restrained her and immediately snapped the belt across her backside. Mace was relentless, not giving her any reprieve… or mercy.

Screeching, Kyleigh rocked on the bed, clawing at the bedspread doing her best to gain purchase, escaping his wrath. But he gripped her securely, not giving her an inch of freedom.

Mace spat his words through gritted teeth. “You will not run away again. I’m keeping you safe, and you will stay here until I say. If they find you, they’ll kill you.” Each word was paired with a lash of his strap. Each line of fire overwhelmed her, and she sobbed hysterically into the bedspread. At some point, she must have thrown her hands back in an attempt of self-preservation because he restrained both of them in the small of her back while he whipped her bottom relentlessly.

The previous spanking had begun to look like child’s play in comparison to this one, and she became concerned, wondering how much longer he would continue to blister her ass.

“That’s right. You keep crying because the real lesson is learned when you want it to be over. Do you think you’re learning a lesson, girl?”

He didn’t react to her pleas for mercy. Instead, he continued to rebuke her. “You’re dealing with the mafia here. A man is dead, dammit! And it’s my job to protect you, and I can’t do that if you don’t listen and do as you’re told. Will you do as you’re told?”

“We’re going to be sure you’ll feel these marks tonight and tomorrow, maybe even longer.” His arm raised again, the leather swishing through the air and she clenched her eyes shut. He slashed the belt across her thighs repeatedly, moving from her sit spot to mid-thigh leaving stripe after stripe of agony. Her throat was raw from her screaming, and Kyleigh just kept pleading. “Oh, God! Stop!”

The belt ceased its torment, and he ruthlessly tossed it onto the bed within her line of vision. The wide black belt looked like a snake, and was more lethal in her mind at the moment. Kyleigh resisted the urge to fling it to the floor, angry at its presence, but instead, she turned her head away.

Mace released her hands, and she spread her fingers over her hot backside, gingerly crawling over her buttocks, letting only the fingertips graze the branded flesh. Long thin welts crisscrossed her ass, and she tentatively traced them as a blind person would Braille.

“What do we have here?” Mace’s voice was deeper and raspier, laced with sexual desire. It was then he slid his finger along the crease of her sex.

Kyleigh jumped, not expecting his intrusion—as shocking as it was, it indeed wasn’t undesired. She needed him, even though it galled her.

“You’re absolutely drenched, girl. You may be sobbing and think you don’t enjoy this, but your body is saying you are. You’ve left a wet spot on the bedding with all your excess juices.”

“Dear God,” Kyleigh groaned, burying her face into the comforter, her blush rising from her embarrassment.

Mace thrust his fingers into her, roughly rubbing and brushing along the sensitive skin.

Kyleigh’s clit thrummed to life, and she fought the urge to press back on him—only briefly—and then caved, giving in to her desires, grinding along his hand.

“You like this, don’t you, slut? Admit it. You’re dripping all over my bed and hand. You want Daddy’s cock, don’t you?”

2019-05-11
Chris
Previous: Beyond Oak Street: Their Billionaire Daddies by Emily Tilton
Next: Mate: A Dark Sci-Fi Romance by Trent Evans