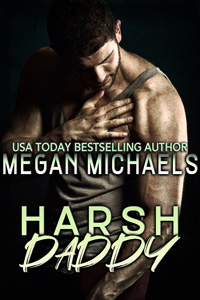 When she suddenly finds herself in the mafia’s crosshairs, Charlotte Winslow is forcibly taken under the protection of Logan Marshall, a no-nonsense FBI contractor working undercover as a mechanic. More disturbing still, she quickly discovers that as long as she remains in his custody she will be calling him daddy and she will be soundly spanked for the slightest disobedience.

Logan isn’t the kind of daddy who sends his little girl to bed with a few pats on the behind when she’s been naughty. He is the kind who leaves her well-used and sore, with her cheeks still blushing, her bottom thoroughly punished inside and out, and her throat tired from screaming her surrender into the sheets as one brutal climax after another teaches her what happens to bad girls.

He’ll be a harsh daddy, but that is just the kind Charlotte needs…

Reaching into the top drawer on a chest of drawers, the corded muscles in his back easily seen, Logan pulled out a brand new package and opened it.

With a wolfen grin, he held something made of pink glass between his fingers. “This ought to do the trick.”

She felt her eyebrows furrow and wondered what the hell it was. Charlie had never seen anything like it, and how in the world would that help her mouth? It looked like a decoration.

“I can tell by your face, girl, that you don’t know what this is, so let me school you. This is what we call a butt plug.” Logan reached into the nightstand drawer, pulling out an easily accessible tube of lube and coated the pink tip of the plug liberally.

“Today, we’re putting this in to remind you to keep that sassy mouth in check, and it’s small enough that you can sleep with it. At some point, we’ll progress to bigger ones.” He pressed his muscular knee into the mattress, holding the greasy plug menacingly. “Head down, ass up, girl.”

“Wrong answer. You don’t tell me no unless it’s something serious. We just talked about this, and you know I’m not going to hurt you. It’s just a reminder. I’ll say it again. Head down, ass up, or you don’t get your orgasm, but you’ll still wear the plug and be tied in bed again. Choice is yours.”

This wasn’t going as planned at all. She had hoped she could get him to give her an orgasm, but she had no idea this was going to be part of the equation.

“Are you choosing to disobey and sleep fitfully?”

Waggling the butt plug, he put an edge to his voice that brooked no dalliance. “Then do as you’re told, little girl.”

The voice that said you better do as you’re told or else.

Charlie pulled in a shaky breath and rolled over onto her tummy, and with more courage than she thought it would take, she pulled her knees up under her, lifting her bottom high into the air. Her bottom cheeks spread open obscenely, leaving nothing to the imagination. But she had the consolation that it couldn’t get worse than this, right?

He tapped the inside of her thigh. “Spread your legs wider.”

Keening, she opened them, the cool air in the room rushing along her back entrance.

Charlie buried her face into the sheets, groaning, finding it hard to believe all the things he had done to her, and even more mortifying was the fact that her body found it so fucking exciting. She swore she dripped like a leaky faucet, and the breeze coming from a nearby window made her aware that the inside of her thighs were wet with the excess of her arousal.

Logan’s fingers spread her cheeks apart, and pressed the cold lubed glass against her little hole, breaching the entrance.

“Look how sweet this little pink rosebud is. We’ll pop this glass right in here.”

With a nudge and a bit of persistence, the glass entered her anus with no problem. The tight ring of muscle clamped around the neck, and Charlotte had to admit that it didn’t hurt. But she knew any movement would remind her of the glass intruder, communicating clearly that she needed to mind her tongue.