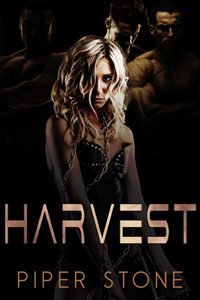 They chose me. Now they are going to breed me.

The Centurions conquered Earth long before I was born, but they did not come for our land or our resources. They came for mates, women deemed suitable for breeding. Women like me.

Three of the alien brutes decided to claim me, and when I defied them, they made a public example of me, punishing me so thoroughly and shamefully I might never stop blushing.

But now, as my virgin body is used in every way possible, I’m not sure I want them to stop…

Kodroth wiggled fingers between my bruised ass cheeks, finding my dark hole. He shoved two then three inside, pumping several times until I roared in frustration. “She hungers for both.”

“I can see that,” Voltar said, nodding to Kodroth.

There was no time to prepare as Voltar smacked my wide open pussy with the cane. The pain left little white lights dancing in front of my eyes. I tried to scream but there was no sound. Kodroth’s mouth soon followed, lapping my cream while his fingers continued assaulting my asshole.

I didn’t care. I wanted this. I was ablaze with burning desire, no longer just smoldering from their delicate touches. Fuck. What was I thinking? Was this surrendering to them?

Voltar smacked my pussy twice more before easing off the bed. I wanted to beg him to stay, to punish me, but he swapped places with Kodroth, his rugged hands pushing my thighs up off the bed. He buried his face into my pussy, sucking and licking my clit.

“Do you like that, little human?” Kodroth asked as he pinched my nipples.

I had no way of answering, the pleasure brewing to a crazed storm. I was barely cognizant of what was going on until I heard a strange creaking noise. Then there was pain, the kind of blinding anguish that tightens up your asshole, only when mine did, it wrapped around a brand new set of thick fingers. Voltar’s fingers to be exact. I gasped several times, tears rushing to my eyes as I searched for the source of cataclysmic pain.

The fucker had placed the primitive-looking clamps around my nipples. I moaned, snarled then half screamed until Degan’s thick, long cock was shoved into my mouth. I was thrown by the combination of utter pleasure and raw agony and I knew my entire body was shaking.

Degan let out a savage roar as he pumped into my mouth, tilting my head until he was able to tickle the back of my throat.

I knew tears were sliding down both sides of my face, hitting the bedding, but oddly enough, they weren’t from sadness. I was more alive than I’d ever been. The white-hot heat of searing pain in my nipples began to subside as Kodroth kneaded my breasts, occasionally his fingers hitting the clamps.

I fell into the same rhythm my masters were using, gearing up for a round of intense anguish as Kodroth flicked the clamps, and pleasure as Voltar sucked my clit until I was about to come. Then he stopped. Even the taste of Degan’s pre-cum was nothing more than a teaser. The brink of ecstasy and yank back. The edge of brutal anguish and yank back. The yo-yo kept me panting, hungry like a wild bitch in heat and ready to scratch out their eyes.

Kodroth quickly came to the rescue, tenderly licking my bruised nipples until my breathing was normal.

I must have fallen into a light slumber because when I opened my eyes again, I was no longer shackled in any manner. Stretching, I purred as the bedding scratched my bottom, scraping the crimson skin. They were right there, drinks in their hands and smiles on their faces. I wanted to call out, to beg them to return, but I cupped my breasts, trying to soothe the remaining burn.