Held as His Pet by Vonna Harper 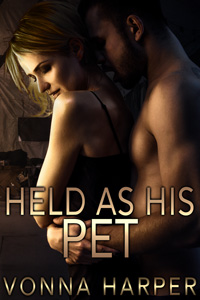 Sara Bauer knew allowing herself to be taken prisoner in order to search for her missing brother behind enemy lines would be risky, but she didn’t anticipate being bared and soundly spanked by a stern, handsome officer, then fitted with a leash, collar, and tail and kept as his caged pet.

When a bright red bottom proves insufficient to loosen Sara’s tongue, her determined captor sets about breaking her in a much more intimate way. Soon she is writhing in desperate, shameful ecstasy as one brutally intense climax after another is forced from her naked, quivering body.

Despite his willingness to interrogate her in such a humiliating fashion, the man who has made himself Sara’s master agrees to aid her in her search, but will she be prepared to submit completely enough to convince the dangerous men who may know her brother’s whereabouts?

Publisher’s Note: Held as His Pet is set in the same world as The Predator’s Pet and Mastering His Pet, but it is a stand-alone novel. Held as His Pet includes spankings and sexual scenes. If such material offends you, please don’t buy this book.

“I have several options when it comes to introducing you to what it means to be a pet.” He swiped her labia with a finger then deposited what he’d collected on her ass. “Judging by this I’m assuming the possibility of being my pet appeals to you. A spanking is a proven way of getting a submissive in the mood, but given our circumstances I’m sure you’ll agree that isn’t enough.”

“You don’t know what I’m thinking. Don’t think you do.”

“Oh, but I do.” He again ran his finger over where she was wet. This time he placed her juices at the back of her neck. “And to make sure you don’t lose sight of what’s meant by dominance, I’ve decided on a butt plug.”

The words butt plug undermined what she’d always believed about herself. The older man who’d talked her into taking him in the ass had tried to convince her to let him stretch her there via a glass plug he’d just happened to have with him. Furious, she’d told him to shove it in his own ass. She’d even help.

She couldn’t do that now—even if she wanted to.

“You can’t be surprised, but first I need to get you ready there.”

Well, in that case—

Telling herself they wouldn’t be having this conversation if she hadn’t agreed to debase herself at his feet, she sighed. Hopefully she’d change her mind once she didn’t need to climax so badly.

“When the package of sex toys first showed up,” he said, “I told my brother I was going to send the lot to him. They didn’t belong here. But I never got around to it. Good thing I procrastinated.”

Tanner wasn’t a man who put off anything. More likely he’d suspected the time would come when he’d need to use the items to bring down a female enemy soldier, not that bring down adequately described what was happening. Feeling disconnected from everything except her body, she tried to concentrate on working her lungs as she waited for this powerfully sexy man to do what he wanted with her.

She jumped when something slick touched her puckered muscles. “Lubrication,” he said as he spread it around her there. “Some for the surface, the rest for inside.”

He was treating her like she was some animal he’d assumed responsibility for. He’d been selected for the task because he had experience in pet training. She was the latest in his collection, no more important to him than those who’d come before her.

Hating the possibility that when he looked back he’d have trouble remembering her, she nevertheless spread her legs. She felt the strain in her inner thighs and along her spine, her shoulders and outstretched arms. She was doing what he, her owner, expected her to do. Nothing more was required of her.

This was something from a different world.

His lubricated finger touched her where she’d seldom been touched. If he had any hesitancy about what he was doing he gave no sign. In fact he took his time, drew out the experience, going ever deeper. She repeatedly tried to lift her head, tried to bring her legs together, tried to separate herself from what was taking place.

This was sexy. No, not sexy. Stimulating. Too much excitement. His finger where it had no right to be and where she needed it. Without making a conscious decision she’d surrendered her body to him. Her nerves too.

“Enough.” He patted her ass. “Now for the plug. Once it’s in you I’ll rig things so it stays in place until I decide otherwise.”