Held in Custody by Ashe Barker 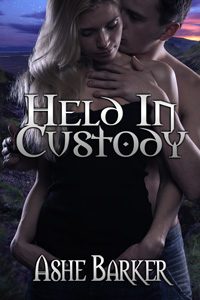 When he encounters an injured young woman while on a motorcycle ride on the small Scottish island of North Uist, police officer Finn Olsen immediately comes to her aid, but to his surprise her dialect proves all but incomprehensible to him. To make matters worse, she first tries to run and then does her best to stab him with a dagger after he catches her.

Recognizing that the woman is confused and distraught, Finn disarms her, handcuffs her, and brings her back to the local police station, which doubles as his home. Once she is in his custody, however, it quickly becomes clear that his beautiful, feisty prisoner comes from a very different era, and that she has somehow travelled forward in time more than a thousand years.

Finn takes it upon himself to keep the headstrong girl safe in a completely unfamiliar world, even going so far as to bare her bottom for a sound spanking with his belt when she attempts an escape. Despite her situation, she is deeply aroused by his bold dominance, and when he claims her properly she is left utterly spent and satisfied. But as they unravel the mystery of her arrival in the twenty-first century, will their discoveries bring an end to their newfound romance?

Publisher’s Note: Held in Custody includes spankings and sexual scenes. If such material offends you, please don’t buy this book.

He patted his lap and waited for Eira to resign herself to the inevitable. It did not take long. Eira edged forward from the head of the bed and eventually threw herself face down across his knee.

Finn lifted the towel to reveal the curved perfection of her bottom. He had, of course, had occasion to admire her body in the shower, though between the T-shirt and his own annoyance that opportunity had been limited. He took his time to savour her now.

Eira flinched when he laid his palm on the soft, tender skin of her buttock. He squeezed, then reached for the belt, which he had laid beside him on the bed. Finn took the precaution of hooking his leg over both of hers to ensure she remained in place, and with his spare hand he held her wrists in the small of her back. He usually derived considerable pleasure from taking his belt to a willing woman and he was only marginally less enthusiastic about administering a decent disciplinary spanking. Now that he had Eira laid across his lap, waiting, he was ready to admit that this was where he had wanted to see her right from the moment he had set eyes on the woman on the road. Even so, he thought it best to get this done with quickly. It was late, they both needed to get some sleep.

Eira yelped when the first stroke landed. She wriggled and squirmed on Finn’s lap but he held her fast. After a few moments she settled and he delivered the second stroke. This time she whimpered but did not struggle. The third and fourth strokes were met with first screams, then sobbing. By the fifth she lay limp, weeping, her bottom sporting five vivid crimson stripes.

Finn laid the belt aside and traced each red wheal with his fingertips. He was gentle, but she hissed with pain even so.

“I know,” murmured Finn. “I know you will. And now, you know what will happen if you don’t.”