Her Alien Doctors by Sara Fields 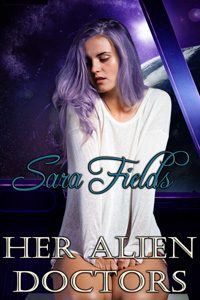 After nineteen-year-old Jenny Monroe is caught stealing from the home of a powerful politician, she is sent to a special prison in deep space to be trained for her future role as an alien’s bride.

Despite the public bare-bottom spanking she receives upon her arrival at the detention center, Jenny remains defiant, and before long she earns herself a trip to the notorious medical wing of the facility. Once there, Jenny quickly discovers that a sore bottom will now be the least of her worries, and soon enough she is naked, restrained, and shamefully on display as three stern, handsome alien doctors examine and correct her in the most humiliating ways imaginable.

The doctors are experts in the treatment of naughty young women, and as Jenny is brought ever closer to the edge of a shattering climax only to be denied again and again, she finds herself begging to be taken in any way they please. But will her captors be content to give Jenny up once her punishment is over, or will they decide to make her their own and master her completely?

Publisher’s Note: Her Alien Doctors is a stand-alone novel which is the second book in the Captive Brides series. It includes spankings and sexual scenes. If such material offends you, please don’t buy this book.

She looked down at her breasts and watched with both horrified and lustful fascination as he laid a doughnut-shaped object over her nipple. With a soft click, he turned a tiny knob and at once, it tightened around her sensitive bud. Gradually the clamp constricted her and she groaned at the sensation. He repeated the treatment on the other side and when he was finished, her nipples felt big and extremely hard. Pinched as they were, her buds ached, both with pleasure and pain. Her breathing quickened as she struggled to get used to the idea.

Dean touched the tip of each nipple and she cried out at the incredible tremors washing over her. It hurt and it hurt a lot, but she didn’t hate it. Instead, every nerve in her body felt like it was on fire and ready for more. She could feel the wetness gathering between her legs. There was a growing need, deep in her core, for something more, something to satiate her lust, but she didn’t quite know what.

Eric’s voice startled her from her musings and she looked up apprehensively.

“No, wait! Don’t you dare touch me!” she cried out, her eyes wide. They couldn’t mean to probe her there, right? No one had ever ventured near her bottom hole and she wasn’t ready for anyone to start.

“A little resistance is cute, Jenny, but I won’t allow you to deny me access to your body,” Dean warned, his jawline tensing. She squirmed while he observed her through narrowed eyes.

She gasped, shocked into silence. Her own backside tightened in response to his words, both nervous and aroused by his demeanor. It seemed clear that either Sean or Eric would spank her, but she wasn’t quite sure about Dean. He seemed to have darker tastes and despite her anxiousness, she yearned to learn more about them.

She jumped when she felt Eric’s hands trace up her thighs and shrieked when he spread a cool slippery liquid over the entrance to her pussy. She yelped out loud when his hand dipped lower. His fingers slid over the tight rim of muscle of her bottom hole and an inherent sense of shame and arousal washed over her. She should be embarrassed that she was reacting to his touch in such a manner, but her body throbbed even hotter than before.

She couldn’t quite see what he was doing, but she could feel a cool object pressing against her wanting channel. Tensing, she tried to wriggle away but the smooth rod breached her entrance and she cried out with pleasure-riddled anxiety. It slowly inserted into her pussy, deeper and deeper and she clenched around it, trying to fight its relentless assault. Despite her mental battle, she gasped as her body rebelled. Her folds dampened considerably with her desire, making the object’s journey inside her an even easier one. Crying out in shame, she wished she could cover her face to hide from the men’s probing gazes.

Yelping when Eric’s finger again touched her bottom hole, she squeezed her ass cheeks together to stop him from whatever he intended on doing. This simply earned her a few harsh smacks to her backside and she quickly tried to unclench her muscles so that the extra stingy spanks would stop.