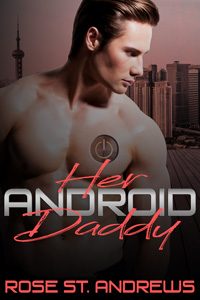 When robotics expert Bernadette McKellar succeeds in building a highly advanced android, the last thing she expects is for her immensely strong, ridiculously handsome creation to assume the role of her strict daddy, providing firm guidance and stern correction whether she likes it or not.

Leo was not programmed take anyone over his knee, let alone the brilliant scientist who designed him, but when he observes Bernadette’s behavior he concludes that she is in desperate need of his assistance. From now on, she will be spanked on her bare bottom when she has been a bad little girl, and far more humiliating punishments will be employed if her naughtiness persists.

Despite her initial shock at such shameful treatment, Bernadette soon finds herself delighting in Leo’s attention and thriving under his watchful eye, not to mention quivering with pleasure as he masters her body completely. But what does he have in store for her and the rest of humanity?

She gasped and moved to the far side of the tub. “No, Leo, I know what you’re thinking, don’t you dare!”

Leo demonstrated just how strong he was and how good his balance was by reaching across the tub, hoisting her completely out of the water, and then drawing her across his lap as he sat. Despite being sopping wet, she still couldn’t get free, and she learned that getting spanked on a wet bottom stung a lot more.

“Bernie, I am disappointed in you, I thought you were showing real improvement in your behavior. It seems I was mistaken,” he scolded.

He was not impressed, and thus his hand danced from one bare and damp cheek to another over and over. Water droplets flew, she whined and complained, and her poor behind heated up. However, he did seem to take pity on her at least a little bit, the spanking was far briefer than she expected, and then he gave her a towel and sent her to her room to stand in the corner while he cleaned up the bathroom. Drying herself off, being gentle with her tender behind, she made her way to her room, and only then realized what he’d said.

He expects me to go to a corner like an errant child? Ohhh, he is going to make me lose my temper again, which’ll just be more of a pain in the ass for me. Okay, I’ll play along; play along until I can figure out what to do.

She moved to the far corner next to her dresser and stood there, her hands lightly cupping and caressing her tender cheeks. Looking over her shoulder, she caught sight of herself in the wall mirror. The deep pink of her behind stood in stark contrast to the flawless white of the rest of her skin. She shook her head at the thought of what was going on in her life; she was being spanked like a naughty child and controlled by her own creation! So, what was she going to do about it? Telling anyone about what he’d put her through was out of the question, it would be too humiliating to ever admit. Plus, if the authorities learned she’d constructed such an advanced AI unit without permission, she’d end up in a penal colony faster than she could say ‘Botany Bay.’

No, I will deal with this on my own. At some point during one of his upgrades, I’ll slip a shutdown subroutine into his OS, and then I’ll regain control of the situation.

She practically jumped in surprise. He’d been quiet and she’d been lost in thought. Turning, she found him sitting on the end of the bed, still dressed, and he gestured at his lap.

“Ohhh, now what?” she groaned.

He smiled. “Nothing bad, I assure you. I intended that this night would be pleasurable for you, and so I’m going to give you some relief before we proceed.”