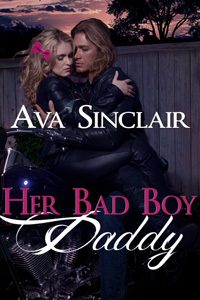 For twenty-year-old Carrie Lynn Lassiter, an evening at a biker bar was meant to be no more than a defiant walk on the wild side and an act of rebellion against a father who never loved her. But when she catches the eye of the leader of a ruthless outlaw biker gang, she soon finds herself in way over her head.

As second in command of The Rebel Sons, Jake Greer is all too familiar with the brutal tactics of the Vipers, the rival gang he holds responsible for his father’s murder. When he stumbles upon a beautiful, vulnerable young woman running for her life from them, he doesn’t think twice about rescuing her.

It doesn’t take long for Jake to figure out that Carrie Lynn is no biker chick, but something about the sweet yet sassy girl leaves him aching to bare her little bottom, spank her soundly, and then claim her hard and thoroughly.

Carrie Lynn can’t hide her need for Jake’s firm-handed dominance, and soon enough she is begging for more as he brings her to one shattering climax after another. But Jake has powerful enemies who won’t hesitate to use Carrie Lynn to get to him. Will keeping his little girl safe mean leading The Rebel Sons into a war they might not win?

“You don’t know anything about me!” she said hotly. “And I’m not going to sit here and be judged by some greasy fucking…”

Jake didn’t give Carrie a chance to finish her sentence. Pulling her across his lap wasn’t something he had planned, but it felt perfectly natural at that moment. The girl seemed to have the mistaken notion that she could behave rashly when she felt like it. That was the kind of thinking that had almost gotten her raped in a barn. And that was the kind of thinking Jake was about to stop dead in its tracks.

“Owwwww!” Her cry of pain resounded through the room as his large hand impacted hard across the seat of her little shorts. Carrie bucked surprisingly hard on his lap as she spewed forth a tirade of tear-laden obscenities that dissolved into unintelligible pleas as he reached underneath her to deftly unsnap her tight denim shorts.

“No!!” She was looking back frantically, her little hand scrabbling to take hold of his as he jerked the shorts down to mid-thigh. “You can’t do this!”

“Think you can stop me, little girl?” Jake raised his hand and brought it down hard over her panties, raising his voice now so she’d hear him over the sound of her own pained wail. “You think I’m a bad boy? Maybe I am, but this bad boy is about to make sure you remember to be a good girl. And the way I see it, a bare-ass spanking is the best way to send that message.”

2016-06-18
+admin
Previous: Governing His Bride by Emily Tilton
Next: Their Dirty Little Secrets by Shelly Douglas