Her Bossy Daddy by Adaline Raine 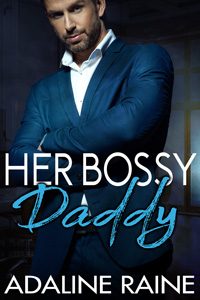 When the stern, handsome Irishman who has become her online daddy dom moves to New York to start a new job, Lacey Porter is shocked to discover that not only has he been hired by the company where she works, he will actually be her boss. Though the idea of being taken over her strict daddy’s knee for a bare bottom spanking when she’s been naughty leaves Lacey’s panties soaked, the thought of such a thing finally happening in real life is as terrifying as it is exciting.

Liam O’Connell wastes no time in making it clear to Lacey that he is in charge now, and when she fakes an illness to stay home for the day she soon finds herself blushing crimson as her temperature is taken in the most embarrassing manner possible. Once the reading confirms her deception she learns the hard way that little girls who lie to daddy get their bottoms punished inside and out, but when she is sent to work sore and plugged Lacey’s arousal is undeniable.

Over the coming days, Liam sets about teaching Lacey what it means to belong to a firm but loving daddy, and being held in his arms after he has claimed her properly is better than she ever dreamed. But when a rival grows jealous of their romance, will her scheming ruin Liam’s career?

Publisher’s Note: Her Bossy Daddy includes spankings and sexual scenes. If such material offends you, please don’t buy this book.

I wasn’t sure what to expect since I was bared to him, but it wasn’t what happened next. His palm slapped hard across my behind. Three blows landed in fast succession followed by three more. Over and over again a set of three smacked against one cheek, and then the same intensity hit the other.

“Ouch! Ouch!” I reached my hand back to stop the onslaught, but he caught it in one of his and pinned it to the small of my back. Several more hard slaps attacked the lowest curve of my bottom then lighter stingy slaps bounced from cheek to cheek. “Stop!”

“Who decides when your punishment is over, love?”

“Right. So, here’s what’s going to happen. We’re going to check and see if you’ve got a fever. If you do, then I’m taking you to the doctor. If you don’t, then once I’m done with you, you’re going to wish you did. Get me?”

“Yes, it’s clear.” I adored the way he asked me if I understood him. Some might find his question aggressive, but his accent softened it. I braced myself for another round, but he released my arm.

“Ready the thermometer, and then hand it to me.”

I twirled open the lid to the jar and set it next to the small container. I popped open the case, carefully removed the instrument, then twisted it once in the lube. I’ve envisioned this moment a hundred times, but never quite this way. I held out the instrument over my shoulder without a word.

“Good girl,” he whispered as he took it from me. Seconds later my cheeks were spread, and the glass rod slowly pushed into me. “Relax. We’ll be done in a minute.”

The reading took at least three or four minutes to register, so it would be at least that long, except he promised more consequences without a fever. Liam tangled the fingers of his free hand in my hair, caressing and soothing as if he did this all the time. My entire body softened as his touch relaxed me. “I lied about the thermometer.” His fingers stiffened at my confession. “And I lied about being very sick. It’s not physical. I should have called in for a mental health day or a personal day.”

“I’m not happy to hear that.” Liam removed the thermometer, and then he laid it down on the coffee table. “No fever.” His hand struck hard and fast from the roundest part of my ass to the lowest curves and all the places in between. I kicked my feet out and he scissored one of his legs over mine.

“Ouch, ouch!” I wiggled upward but he had me trapped.

“We aren’t even close to done yet. Stop fighting me, Lacey.”

I wanted to take my punishment like the good girl he’d shaped me into, but my emotions were on overdrive. I tried to push my way off his lap again. His belt buckle clanked followed by the sharp sound of leather as it whipped through his belt loops, and then both of my hands were bound behind my back. Fuck. He barely missed a beat and rained his hand down against my burning globes. The blows weren’t overly heavy, but they were consistent. Liam kept the rhythm, but I’d lost track of everything except how heated my cheeks were. I cried, sniffling and gasping. I’d never been able to self-punish to tears, and I slumped listlessly against his thighs.

2019-03-16
Chris
Previous: His Caged Princess: A Dark Sci-Fi Romance by Marlee Wray
Next: His Caged Mate by Morganna Williams