Her Celtic Captor by Ashe Barker 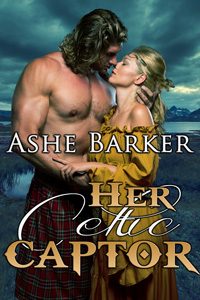 As the sister of a powerful Viking chief, Brynhild Freysson is used to giving orders and having them obeyed, which makes it all the more difficult to accept when she suddenly finds herself at the mercy of a Celtic warrior intent on bringing her back to his village whether she likes it or not.

Taranc was a leader of his people before he was taken captive by Viking raiders, and now that he is a free man once more he has no intention of allowing a headstrong Norse woman to slow down his journey home with her stubborn disobedience. When Brynhild refuses to do as she is told, he wastes no time in baring her bottom for a thorough switching, and he makes it quite clear that she can expect even more painful and humiliating punishments if she continues to defy him.

Though her hatred of the Celts runs deep, Taranc’s stern dominance awakens desires in Brynhild that she thought she would never feel again, and when he takes her in his arms and claims her properly it is more pleasurable than she would have thought possible. But though her passion for him grows by the day, can she ever truly love a man whose people are enemies of her own?

Publisher’s Note: Her Celtic Captor is a stand-alone sequel to Her Rogue Viking and Her Dark Viking. It includes spankings and sexual scenes. If such material offends you, please don’t buy this book.

Taranc took a moment to admire her slender back and rounded buttocks as they were displayed before him. Her skin was pale in comparison to his own sun-kissed torso, testimony to her Nordic heritage and to a life spent in a cool climate. He trailed the backs of his fingers down her spine, noting the way she trembled under his touch but did not squirm or wriggle. She was scared, apprehensive, but she was ready to surrender to his demands.

“This is good. Now you will reach back with both your hands and hold your buttocks apart for me.”

Brynhild gasped. “I cannot. You cannot ask me to do that.”

“I have not asked you, I have told you. Now you will obey.”

And she did. After just a moment or two of hesitation, Brynhild stretched her arms behind her and dug her fingers into the fleshy curves of her bottom. She pulled the soft globes apart, exposing the tight ring of muscle that guarded her secret entrance, soon to be breached.

“I cannot see properly. Lift your bottom up a little more. Show me your arse, Brynhild, then ask me to place the ginger inside your hole.”

Taranc’s cock leapt to granite hardness as she adjusted her position to afford him a better view. She planted her feet firmly on the rough earth floor in order to lift her buttocks higher and tip a little further forward on his lap.

“Spread your legs, too. I want to see your pretty cunny, and watch your arousal grow as I spank you.”

At another time she might have disputed the prospect of arousal, but she merely widened her stance to expose her plump lower lips to his view. Despite her nervousness, and the humiliation he was heaping upon her with the promise of worse to come, her clitty was already swollen and peeking out from under the hood that sheathed it. Taranc saw no reason not to enjoy himself by toying with her for a while.

He laid the tip of his finger on her clit and circled the sensitive nub, slow at first, his touch the barest whisper. He increased the speed and pressure as she swelled and writhed, only stopping when he sensed she was close to her climax. He traced the outer edges of her entrance, his touch idle now as he collected her moisture on his fingers.

“I shall use your own juices to ease the way for the ginger because I am not a heartless man, but be under no illusion that this will be easy. The natural oils from the root will provide some help, I daresay, but they will feel as though they are burning your tender skin. This is a most sensitive place, my proud Viking, as you are soon to discover.”

2017-08-12
Chris
Previous: His to Ride by Ava Sinclair
Next: Sentenced to a Punishment Examination by Carole Archer