Her Christmas Daddy by Dinah McLeod 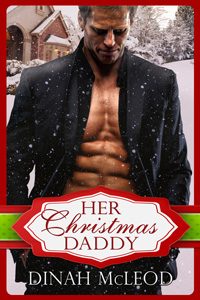 When Sara Schroder returns home from college to spend Christmas in the town where she grew up, it doesn’t take long for her reckless driving to get her in trouble. But police officer Alex Maxwell—the next-door neighbor she’s had a crush on for years—decides to handle the situation himself, and instead of being given a ticket Sara quickly finds herself over his knee with her bottom bare for the first spanking of her life.

Though the punishment leaves her deeply embarrassed, Sara cannot deny her arousal at being taken in hand so firmly by a man like Alex, and soon she is calling him daddy and delighting in his caring attention and his hard, dominant lovemaking. But can she learn to behave like a good little girl for him or will she spend the holidays with blushing cheeks and a bright red bottom?

Publisher’s Note: Her Christmas Daddy includes spankings, sexual scenes, and age play. If such material offends you, please don’t buy this book. This book is also available as part of a five-book collection entitled A Very Naughty Christmas.

From the very first smack that echoed through the room, Alex had Sara’s round nether cheeks blushing. Though it was her face that responded first—forget the pain, being a grown woman over a man’s lap getting her bottom blistered was embarrassing!—it wasn’t long before her round orbs followed suit. The man meant business, that was for sure! From the very first swat, she could tell that he’d meant what he said: he would be giving her a lesson that she wouldn’t soon forget.

She tried to fight the urge to cry out. Sure, he’d said that she could, had implied that she’d want to, but the thought of crying like a baby was just too humiliating. Wasn’t him spanking her enough? She already knew that she’d never be able to look him in the eye again once this was over. The silver lining to that, if there possibly was one, was that she probably would be cured of her crush, once and for all.

As the firm, solid spanks kept raining down, she had to bite her lip and use every ounce of willpower she possessed to keep from begging him to stop. Both her cheeks were blushing beneath her cotton panties—she only knew because she could feel the heat radiating—when he rested his hand on her back. Thank God. It was over, at last. It really hadn’t been that bad. It had hurt, sure, but hadn’t been anything more than she could handle.

“You took your warmup really well,” he praised her, making her smile despite the fact that he couldn’t see her face. “Now I’m going to pull down these panties and we’ll get started.”

Wait a minute, what? But… she’d thought it was over! She turned her head back to stare at him, feeling flutters of panic. She’d forgotten that he’d promised her a spanking on the bare. She’d let it slip her mind that what she’d just received was only the beginning. And knowing that she was going to lose the last bit of protection between her poor, tender bottom and his hand was almost worse than the embarrassment she felt over the idea of him seeing her bare butt. Not that there was anything she could do about it—she’d already agreed. What had she been thinking? She should have just taken her chances with the ticket!

She felt him hook his thumbs in the band of her panties and slowly, ever so slowly, they began to slide down her vulnerable, blushing rear. She winced at the feeling of the cool air as it caressed her naked posterior. If she could, she would take it all back and shovel snow all winter if she had to pay for the damned ticket! But she had a feeling that Alex Maxwell was a man who, once he got started, didn’t change his plans. It was just very unfortunate for her that his plans involved her already tender behind and his hard spanking hand.

She hadn’t thought that her panties had afforded her much protection, but from the first swat of his hand against her now bare bottom, she could feel the difference. The cotton barrier had apparently shielded her more than she’d realized. Even the sound was different—the smack somehow had a fuller echo as it bounded throughout the kitchen. But she was soon too busy thinking about how it felt to listen to the echoes of her bottom being smacked. His hand fell much too fast, first on one cheek, then the other, then down the middle, a pattern that was repeated again and again in a relentless fashion that had Sara gasping for breath.

2016-12-15
+admin
Previous: Master of Her World by Lily Harlem
Next: Mistletoe Magic by Maddie Taylor