Her Cowboy Daddy by Dinah McLeod 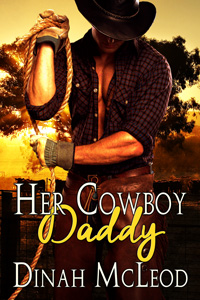 Though she does her best to be happy as a small town waitress, nineteen-year-old Scarlett can’t help longing for something different in her life. To her surprise, that something different turns out to be a handsome cowboy named Colton, in town for the bull-riding event in a local rodeo.

Scarlett’s introduction to Colton is an embarrassing one—he spanks her soundly after a careless attempt to pet a rodeo horse almost gets her hurt—but despite the shameful punishment, his smooth drawl and old-fashioned manners leave her heart racing and her body aching for more of his touch. Lunch together the next day quickly turns into a date, and when Colton tells her that a firm daddy is exactly what she needs, she finds herself agreeing to try being his little girl.

But when Colton discovers that Scarlett has been lying to him and pretending to be sick to avoid telling him the truth about a former boyfriend’s threatening behavior, he decides to make sure she learns to be truthful with her daddy in the future. After taking her temperature the way naughty little girls have it taken, he punishes her bottom thoroughly, both inside and out, leaving her blushing crimson and promising never to lie to him again.

Scarlett soon realizes that she is more in love with Colton than she ever dreamed possible, but when her ex’s behavior becomes even more alarming will her cowboy daddy act quickly enough to protect his little girl?

“Look here, darlin’, this is how it’s gonna go,” he interrupted. “I will not ask you again: you can either lie over my lap like a good little girl, or I’ll put you over it. Your choice.”

Some choice! She nearly stuck her tongue out at him, but stopped just in time.

“Colton! Stop it! Just give me a minute to think!”

“This isn’t fair!” she protested indignantly.

She leapt up, but not quickly enough, it seemed, as she felt herself caught around the waist. She gave a frustrated squeal and kicked her legs, but nothing deterred Colton from pulling her over his lap. He shucked her shorts down, yanking the panties down with them and had her bottom bared in seconds.

“No! Stop it!” She scissored her legs and tried to break free, but he had an iron grip on her.

“None of that,” he scolded, giving a sharp smack to each of her quivering cheeks.

“C-Colton, don’t!” she whined, sniffling as the sting spread across her skin.

“This would already be over if you’d just lie still.”

“I said be still,” he ordered in a voice that would brook no argument. Whimpering, Scarlett complied and he quickly—though gently—inserted the tip of the thermometer into her tight anus. The jelly was the perfect lubricant to help it slide into her tight hole.

She shivered at the feel of the hard plastic going into her virgin hole. Though it was definitely uncomfortable, it wasn’t so bad. It embarrassed her more than it hurt. She never would have imagined that she’d find herself in this situation—over a man’s lap with a thermometer up her ass. For all her protesting, now that it was in place, the initial fear she’d felt gave way to something else. She felt… safe. And cared for. Odd, that she’d have such a reaction, but it was how she felt. She found herself relaxing over his knee and silently preening in the attention as he rubbed her back and gently encouraged her. When it beeped, she was almost sorry, though not sorry to see the end of the thermometer.

“Hmm,” he clucked his tongue at the thermometer. “You don’t have a fever.”

2015-08-23
+admin
Previous: Her Master’s Hand by Korey Mae Johnson
Next: Bound and Initiated by Emily Tilton