Her Cyborg Daddy by Katie Douglas 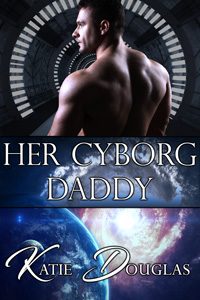 Zanthia is well-trained in the art of diplomacy, but she quickly finds herself in way over her head when she is assigned as the liaison for Unit 7090 Mark III, also known as Mark. The stunningly handsome, impossibly virile cyborg ambassador from an AI civilization has plans for his first encounter with a woman, and those plans include making Zanthia call him daddy, spanking her bare bottom when she is naughty, and enjoying her beautiful body in any way he pleases.

Though she is shocked by Mark’s demands, Zanthia soon finds herself quivering with desperate, shameful desire as she is stripped naked, restrained to an exam table, and brought to one helpless, blushing climax after another. That is only the beginning of her ordeal, and over the coming days Zanthia learns what it means to belong to a daddy who will not hesitate to explore even the most intimate and embarrassing of his little girl’s needs. But when Mark brings Zanthia with him to his world, will the arrival of a biological lifeform throw his civilization into chaos?

Publisher’s Note: Her Cyborg Daddy is a stand-alone book which is the third entry in the Twenty-Fourth Century Daddies series. It includes spankings, sexual scenes, and age play. If such material offends you, please don’t buy this book.

“What would you like me to do with this pussy, Zanthia?” he asked. She moaned in response, but struggled to put her thoughts into words. A sharp swat against her clit made her jump and pay more attention.

“I asked you a question, young lady,” he prompted.

“I don’t know… fill it with something?” She didn’t think it was her place to tell him what to do. He was silent for a moment, and she hoped he was contemplating what he might like to do, but instead he pinched her clit then spanked it again. Lightning bolts exploded inside her and she squealed with surprise.

“Answer the question otherwise I am inclined to spank your pussy harder,” Mark told her. Zanthia shook her head. She didn’t know what she wanted, only that her sheath ached to be filled with something, and her soul yearned to be completed. The fine details barely seemed relevant in the face of such an insurmountable wish list.

A sharper swat landed on her clit, making her arch her back then wriggle once she was flat on the bed again.

“If you don’t answer me, I’m going to turn you over my knee and I will explore your bottom hole with my fingers.” Mark’s voice held no anger as he spoke. Zanthia quivered in delight at the thought of Mark’s big fingers sliding into her bottom hole and igniting the dormant nerves there, the way he had filled her rear before with the probe, but less distant. She longed for a connection with him.

“That’s not an answer. I surmise that your pussy didn’t want the attention.” He rearranged her so she lay over his knee, him sat in the middle of the bed so her whole body was supported by the mattress. Her breathing hitched in her throat as she waited for him to make a move.

“Hold your cheeks apart for me young lady,” he told her. Zanthia groaned into the bed and shook her head. Three sharp swats landed on her sit spot and exploded in a burst of fire.

“Oww!” she growled through gritted teeth.

“Hold your cheeks apart,” he reiterated. With a sigh, Zanthia reached back and grabbed the mounds of flesh then pulled them open, displaying herself to him in the most humiliating way imaginable.

“Don’t let go of your bottom, young lady, or you will find yourself with an even longer, harder punishment.” His words made her heavy clit throb.

His hand swatted her tender bottom flesh and she squeaked as the sharper pain radiated through her delicate valley. When he did it again, her bottom hole responded by blinking open for a moment, then closing again. Knowing he saw every response that her body produced was mortifying, and Zanthia just wanted to disappear.

“You are very wet again, Zanthia. Does the idea of having your bottom hole punished arouse you?”

2017-10-29
Chris
Previous: Married to Her Master by Aurie Jameson
Next: In Need of Correction by Gracie Malling