Her Daddy and Her Master by Katie Douglas 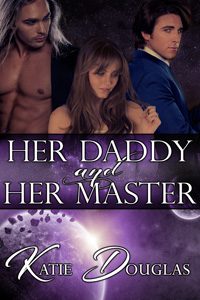 Only moments after first setting eyes on Laila, a desperate young woman fleeing from a backwater planet to avoid a forced marriage, Basil’s conscience drives him to offer her a place on his ship. Though his intervention draws the wrath of the powerful gangster who had sought to claim her, Laila’s innocence and beauty quickly capture Basil’s heart.

Despite her fear that they will one day tire of her, Laila delights in the attention of her rescuer and his partner, a huge, handsome half-elf named Flin. Taking on the role of her firm but loving daddy, Basil does not hesitate to spank Laila’s bare bottom whenever she is naughty, but she can also count on him to protect her, comfort her, and care for her as his little girl. Flin, on the other hand, sets out to teach Laila how pleasurable it can be to surrender herself completely to his stern, practiced dominance and his thorough, intimate mastery of her body.

Laila’s love for Basil and Flin grows deeper each day, and as painful memories of the past slowly begin to fade she finds herself looking forward to her future for the first time in her life. But with the ruthless criminal from whom she escaped still seeking to hunt her down, can her daddy and her master find a way to keep her safe?

“Bend over the bathtub.”

Laila’s eyes widened. She fixed him with a horrified stare, then gripped her towel more tightly.

“The longer it takes, the less bath time you’ll have afterwards,” Basil told her, but Laila folded her arms and shook her head.

“Fine, have it your way.” Basil walked out of the bathroom, leaving her standing there. He hoped it would give her pause to think about how far she was pushing her luck. It wasn’t all for show, however, and he went to his cabin to retrieve Laila’s hairbrush. Giving it a quick clean, he returned to the bathroom.

“Are you going to bend over the tub now?” He held the hairbrush casually in one hand. Laila shook her head again. How did she think this was going to end? He had to wonder.

In a swift movement, Basil yanked her towel off then sat on the edge of the tub and tipped her unceremoniously over his knee. Laila hadn’t been wearing any underwear, and now her bare bottom was exposed for Basil to redden.

“Bad girls don’t get good baths,” he said quietly, then began spanking her cheeks with her hairbrush. She squeaked, kicked, and tried to flail her arms, which Basil had left dangling to give her some support.

The hairbrush left oval-shaped marks on her skin as he brought it down, and soon her bottom was more pink than white, with a few little shapes that needed some overlap. He decided a darker pink was in order, so he kept going, as Laila kept struggling to get away.

“You know the rules. Throwing a tantrum because I’m flying the ship is unacceptable,” Basil said.

“You weren’t flying though! You were stopping the ship! What would have happened if you’d looked away for a few seconds? We only would have stopped a bit slower!” Laila argued. Basil decided if she could still shout like that, she hadn’t learned her lesson. He continued applying the hairbrush to her unrepentant bottom as she slowly began to stop fighting him. A few minutes later, she seemed to be concentrating on holding herself up, then it wasn’t long before she started making sobbing noises and went limp.

“That’s better.” Basil continued to spank her; he knew she wasn’t done yet. Her behavior was unacceptable, and she needed to learn to express herself in a less confrontational way, without bottling everything up inside her then waiting for it to explode. He surmised that she had gotten this upset because all her emotions about going back near to her home planet must have brought up a lot of conflicting feelings. The bath had been the last straw for her temper, but it still needed to be challenged.

When he heard the change from sobbing to real tears, he knew it was nearly time to stop. He gave her a few hard ones on her sit spots, then put the brush down and gently rubbed her glowing red bottom.