Her Darkest Desires by Kallista Dane 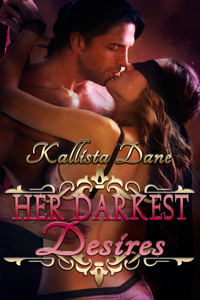 Claire’s world has been turned upside down. She’s suddenly single again, alone for the first time in years, with no idea of what to do with her life. When she finds a series of intriguing ads promising to make every wicked, secret fantasy she’s ever imagined come true, she signs up for a weekend at the X-rated mountain resort The Dark Side of the Moon.

Run by the mysterious Lady Gwen, an ageless Amazon of a woman, and her partner Mistress Jade, a six foot tall domme with an army of devoted subs to do her bidding, The Dark Side of the Moon proves to be everything it promised. Claire finds herself paired with a hot, young dom named Kyle who is more than willing to introduce her to a whole new lifestyle—one that includes plenty of stern, over-the-knee spankings on her bare bottom, mixed with the hottest, steamiest sex she’s ever had.

Now that her darkest, most savage hungers have been awakened, can Claire bring herself to say goodbye to Kyle and go back to her old life?

Claire was yanked from her reverie by the sudden stopping of the limo. The door to the passenger compartment flew open. “Ladies, please keep your eye coverings in place until you are given permission to remove them. One of you has broken a major rule. I’ve seen you in the rear view mirror lifting your blindfold to peek out the window. You were told that there would be consequences for ignoring the rules, and you agreed to accept those consequences.”

Claire felt him sit down near her on the long bench seat. His arm reached past her.

“I’m afraid I’m going to have to punish you for your disobedience. Come here. Lay face down across my lap—and don’t move.”

Claire couldn’t tell which of the passengers he’d grabbed, but she felt the weight of another body on the seat. Kyle began talking, describing his actions for the other passengers as they each imagined themselves in the faceless woman’s position.

“With a major infraction like this, I’m required to immediately raise your skirt up to your waist, pull down these lace panties, and deliver a firm spanking to your bare bottom.”

Claire heard the swish of fabric, then a loud SMACK, followed by a gasp and a shriek. She could feel the woman squirm around on the seat next to her as three more harsh whacks of the chauffeur’s palm could be heard.

“You will remain in place over my lap without moving, or you’ll get another spanking, this time under restraints, when we arrive at our destination,” he announced, his voice stern. Half a dozen more sharp cracks followed in quick succession.

“No, please!” the woman cried out.

“Silence! You’ve just broken another rule by speaking… and doubled your punishment from me,” he declared. “And now, I’ll have to report your bad behavior to Mistress Jade when we arrive.” He began spanking again as he spoke. Claire’s stomach fluttered as she listened to the impact of his palm on the tender flesh of the woman’s naked ass. The blindfold allowed her imagination free rein, putting herself in that submissive position over the lap of the hot hunk next to her. Getting a real, over the knee, bare-ass spanking had been one of her top-ranked fantasies on that lengthy questionnaire. A flush of arousal made her grateful that the other women were sightless as well.

“I’m sure Mistress Jade will want to deliver her own punishment to you as well at the reception tonight… to demonstrate to our other guests how seriously we take it when a clause in the contract is broken.”

There was an audible gasp from one of the seats across the limo, but the hapless passenger across Kyle’s lap didn’t risk any harsher consequences by protesting again. Only moans and muffled sobs accompanied the harsh sound of Kyle’s hand relentlessly whacking her over and over. One last loud crack brought another stifled cry, then silence.