Her Doctor in Charge by Maggie Carpenter 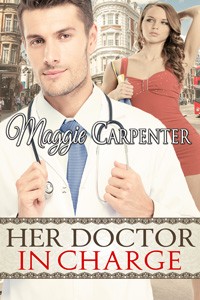 It doesn’t take long for Dr. Daniel Dupont to come up with a diagnosis and treatment plan for his new patient, the beautiful Lady Sybil Sinclair. The free-spirited daughter of the aristocracy has been drinking and partying too much while eating and sleeping too little, and in his best medical judgment what she needs is a good, hard, bare-bottom spanking.

Not only is Daniel a man who enjoys a challenge, he also finds the petulant young miss quite appealing, so he casts professional decorum aside and makes it clear to Sybil that if she wants him as her doctor, she will be expected to submit to the spanking she deserves. Sybil nervously agrees, and Daniel soon realizes that the appropriate course of treatment for her will require much more than just a properly reddened backside. What his headstrong patient needs is a man bold enough to take her in hand and dominate her completely.

Soon enough Sybil finds herself shamefully on display on the handsome doctor’s examination table, her well-spanked bare bottom fully exposed and her cheeks burning with humiliation as her temperature is taken the old-fashioned way. Daniel’s thorough exploration of her most intimate charms leaves her trembling with desire, and she begins to wonder if he might be the man she’s been hoping for.

As he gets to know her better, Daniel quickly recognizes that there is much more to Sybil than just a silly girl who likes to party, and his passion for her only grows deeper when he learns the truth about her past and the price she has had to pay to follow her dreams. But when it comes to light that the men Sybil works for are far more dangerous than either of them could have imagined, will Daniel be prepared to stay by her side no matter the risk?

Publisher’s Note: Her Doctor in Charge includes spankings and sexual scenes. If such material offends you, please don’t buy this book.

He saw the telltale hot flush cross her face as she stared back at him. She knew exactly what was in his head, and putting his arm around her shoulders, he nuzzled her neck before moving his lips to whisper his hot breath in her ear.

“That’s right, Lady Sybil, I’m going to put your feet up in those stirrups, and do all sorts of wicked things to you.”

He heard the quick intake of breath, and knew the sacred valley between her legs had flooded. Smiling, he pulled her into his shoulder and did his best to quell his rising cock. He wasn’t quite ready for it to be standing at attention. It was a quick drive to his surgery, and after paying the cabbie he took her hand and led her up the steps. Opening the door to the building, he ushered her inside, then strode quickly to unlock the door to his office.

“I don’t know if I’m trembling because of the cold, or because of what just happened in the taxi,” she declared as he held it open for her. “I can’t believe you said such a thing with that driver right in front of us.”

“Inside, please,” he directed, ignoring her comment, and as she walked ahead of him he landed a solid swat, causing her to spin around and stare at him as he bolted the door behind her.

“What was that?” she asked with wide eyes.

“An appetizer,” he grinned, then taking her elbow, he marched her forward through to his inner sanctum. “First, a solid spanking, and then, my sweet Sybil, a thorough examination.”

“A spanking for what?” she demanded, but as he sat down, he answered her by yanking her over his knee, eliciting a loud squeal.

“So many things,” he declared, swiftly lifting her skirt and unceremoniously pushing down her panties, “arguing with me about the taxi this morning for one, but most especially because I’ve been wanting to have you over my lap since the first day you walked in here.”