Her Dominant Billionaire by Lily Harlem 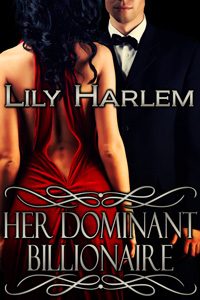 When a wealthy client of her company requests to have lunch with her to discuss a new business venture, Imogen White doesn’t expect to end up answering questions about her most intimate desires. But Kane Ward is no ordinary client. He’s a man who gets what he wants, every time, and it doesn’t take long for Imogen to realize that what he wants is her.

Imogen accompanies Kane to New York City to learn more about his new investment, and with the handsome billionaire’s charm and confidence leaving her breathless things quickly heat up between them. But Kane has very particular tastes, and Imogen soon finds herself kneeling naked at his feet as he teaches her what it means to submit to a dominant man.

The pleasure of yielding to Kane’s masterful lovemaking is more intense than anything she’s experienced before, but Imogen is far from used to giving up control to anyone. Will Kane’s demands drive Imogen from his arms before she can come to terms with her own needs?

Publisher’s Note: Her Dominant Billionaire includes spankings and sexual scenes. If such material offends you, please don’t buy this book. Also note that an earlier version of this book was previously published under the title In Expert Hands.

“A master owns his sub’s body.” He paused. “In this moment, right now, do I own yours?”

“Good.” He stepped closer. He held her face, beneath her chin, and his fingers and thumb rested on her cheeks. “Open up.”

She stared at him and did as he’d asked. She opened her mouth, knowing what was about to happen. She could hardly wait to taste him. Excitement raced through her nerves.

“Wider,” he said, pressing on the hollows in her cheeks.

She did as he’d instructed, opening so wide her jaw ached.

He slipped the head of his cock over her lips. “Jesus, it’s so hot to see you like this.” There was awe in his tone. “I’m going to fuck your mouth now, Imogen. Can you handle that?”

She gave a half nod.

He slid in another inch, spreading his flavor—man and musk and a hint of salt.

She wrapped her tongue around his girth, holding him with it.

He released his cock and took hold of her hair again, gripping it tight. He moaned and pushed in another inch.

She strained toward him, eager for more. Giving oral sex hadn’t been one of her favorite pastimes with previous partners, but damn, with Kane, she wanted more, she wanted all of it.

2016-08-21
+admin
Previous: Chosen by the Doctor by Samantha Madisen
Next: Corralling Callie by Amelia Smarts