Her Gilded Dragon: A Norse Warrior Romance by Susannah Shannon 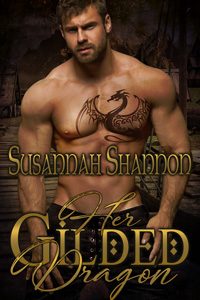 After she is forced to flee her kingdom with the aid of a loyal general, Princess Hanne of Vastra begins a long, arduous journey to the frozen lands far to the north, where she will be married to Jonis the Gilded, the famed warrior who defends the great fortress of Pinnacle Keep.

Though Hanne is intimidated by his fearsome reputation, upon reaching her destination she is put at ease by Jonis’ good humor and amazed by the pleasure his skilled, dominant lovemaking brings her on their wedding night. But when she challenges his authority, the beautiful young princess quickly learns the hard way that her new husband will not hesitate to bare her bottom and spank her until she is tearful and repentant.

To Hanne’s surprise, the stern chastisement merely increases her desire for Jonis, and soon their lust for one another has grown into a passionate love. But when the foes who drove her from her own land threaten Hanne’s new home, will Jonis’ skill in battle prove sufficient to protect the woman he loves or will the ancient power that burns in his blood be his only hope to save her?

Publisher’s Note: Her Gilded Dragon includes spankings and sexual scenes. If such material offends you, please don’t buy this book.

A gentle knuckle under her chin forced her to look at him. “Why am I spanking you?”

“Because I undermined you in front of your boys,” she whispered breathily.

“Why is that unacceptable?”

The book Matilda had given her provided the answer. “Because you can only take really good care of people who obey you.”

He nodded his approval of her answer, but made no other move. She was going to have to submit to it. “Can I,” she stumbled over her words, “go over your knee before you…” The thought of hoisting up her skirts while she stood beside him was too mortifying to contemplate. He nodded yes. She draped herself over his lap, and she felt a wellspring of relief when he firmly grasped her waist and pulled her close. Whatever was about to befall her did not include a tumble onto the stone floor.

“Would it be easier for you if I lifted your skirts for you?”

She could only nod yes. He draped her overdress over her back, and then her dress, and shift. “So many layers,” he murmured.

She could feel his eyes rest on her naked bottom. She had a strong desire to throw her hands over it to shield it from his eyes. But she had given herself to him for the rest of her life; she was his to gaze upon.

He rested his hand on her. His hand was so large, it covered most of her backside. “Such a pretty bottom,” he murmured. He made a tsk noise with his tongue. “But it is on a wife who is never going to treat her husband that way again.” The first slap sounded like a cannon. He peppered her bottom with swift smacks that left her panting for breath and squirming. “You turned pink very fast; you have such lovely porcelain skin.” He paused and rubbed his hand along the crease where her bottom met her thighs. “Defy me again and you won’t have a pretty pink bottom, you will have a red hot one. I have no problem punishing a naughty wife as often as she deserves.” He demonstrated this by increasing the vigor of the slaps he delivered to the crest of her quivering bottom cheeks. “If you disagree with me—fine. You ask to speak to me in private. Understood?”

He moved all over her wiggling bottom making sure that every bit of it was throbbing, but wouldn’t have any terribly bruised spots. Her rump was glowing, its warmth spreading down her legs and around to her belly. “Disrespecting me will always,” hard smack, “always,” harder smack, “leave you with a scorched backside. Is that clear?”

While trying to give voice to a frantic, “Yes, yes, it’s clear,” she couldn’t catch her breath.

He rubbed her back. “Hanne, Hanne, slow down, take a breath, my love.”

His kind words did her in, and she began to cry. He allowed her to lay over him quietly weeping, while he caressed her heaving shoulder blades. “I think you know better now,” he said softly.

2018-04-07
Chris
Previous: Tamed by the Wolf by Jinx Neale
Next: Broken by the Alien: A Dark Sci-Fi Romance by Loki Renard