Her Highland Guardian by Ava Sinclair 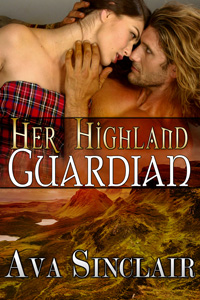 As a modern-minded woman in the year 2657, Dr. Mary Malone is less than thrilled with the task of documenting the domestic life of a married couple in the eighteenth-century Scottish highlands. But though she is appalled by the fact that men in that barely civilized era were known to take it upon themselves to discipline their wives—with a firm hand or a leather strap applied to the bare bottom, no less—she is a historian who takes her duties seriously, even when they involve travelling through time to a bygone age.

Unfortunately for her, something goes horribly wrong on what was to be her final visit, and Mary is left stranded in the highlands with no way to return home. Worse still, she is no longer merely an invisible, untouchable observer of this world. She is there in the flesh, helpless and alone, and to top it all off, she is accosted and accused of witchcraft almost instantly upon being seen.

Clan chieftain Alastair McDonald is pretty sure the mysterious, beautiful woman who makes an unexplained appearance in his village isn’t a witch, though the way she captures his heart from the moment he sets eyes on her does seem like magic. When he learns the truth, he realizes that if she is to be kept safe Mary will have to get used to doing as she is told. He is more than ready to teach her obedience, but what she truly needs is a guardian to love, guide, and care for her.

Alastair is not a man to be trifled with, and when she persists in defying him Mary quickly discovers that a bare-bottom spanking is not the only way to punish a naughty little lass. But though she blushes to admit it, his dominance excites her more than she ever could have imagined and she soon finds herself yearning for more. Yet even as she grows to love her life at his side, she knows that one day she may face a fateful choice. If given the chance to return home, would she leave her highland guardian behind?

“Can ye brew a stew? Break the neck of a snared rabbit, skin it, and cook its flesh along with potatoes ye dug yourself? Can you make bread? Weave cloth and dye it using plants ye picked yourself? Can you make a poultice to treat a bruise? Or a tincture to cure a fever? Can you survive on the moors alone? Do ye know enough of our customs to convince a mob not to burn ye alive?”

Mary wiped her tears away. “I can learn. I can learn all that. And I will. But I will not obey you, Alastair McDonald. I will not! It’s the last thing I want in this world or any other!”

“Is it?” He took hold of her, pulling her close. “Don’t be so quick to say so, lass. It’s been my experience that the fillies who fight the hardest are the sweetest once broken.”

He sat down on the bed, and for the second time, Mary found herself over his lap. This time he pulled her dress up slowly, his deliberate actions obviously intended to emphasize both his control and the time he had to exercise it. She was bare underneath, and sought to find her own control by clamping her toned, white thighs tightly together. She closed her eyes, expecting to feel him pry them apart. But he did not. Instead, he laid his hand across one springy cheek, grasping and squeezing it in a slow, possessive fashion.

“Let go of me, you bastard!” Mary tried to move away from his hand, but it was impossible to maneuver from his grip without moving her legs, and she was committed to keeping them together. When his hand rose and fell with an unexpected sting, she yelped, and then gasped as she realized she felt more than pain. Between her tightly shut thighs, her pussy had begun to throb, just as it had done in the shower the last night before she’d come to this male-dominated world. Alastair smacked her again, and then to her shame, rubbed. The throbbing intensified, and the harder she clamped her legs, the more aware she became of her arousal.

2015-09-06
+admin
Previous: Submission at The Tower by Felicity Brandon
Next: Caught and Collared by Vonna Harper