Her Marine Rancher by Dinah McLeod 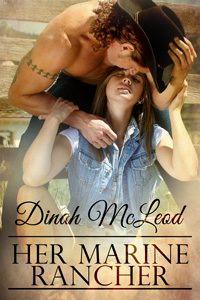 After yet another run-in with the law, nineteen-year-old Cassie Ellis has finally pushed things too far. Facing the prospect of jail time, she agrees to an alternate arrangement in which she will serve her sentence on a local ranch instead, but she soon learns that rancher Robert Johnston will not tolerate the kind of delinquent behavior she’s been getting away with for far too long.

The handsome Marine Corps veteran takes Cassie under his wing, and his kindness and warm sense of humor make it impossible for her not to like him, but when she sneaks out at night and violates the terms of her probation he does not hesitate to bare her bottom and spank her soundly.

The stern punishment brings out a side of Cassie that she didn’t know existed, and she quickly finds herself longing for Robert to hold her in his strong arms and make her his own. When he claims her at last, his masterful lovemaking leaves her utterly satisfied, and a passionate romance quickly blossoms between them. But will there always be a place for Cassie on the ranch, even once her sentence is over?

Publisher’s Note: Her Marine Rancher includes spankings and sexual scenes. If such material offends you, please don’t buy this book.

“Wait, what are you doing?” Cassie asked as Robbie took hold of her wrist and pulled her over to a kitchen chair.

“I’m going to teach you a very, very good lesson about being smarter and more responsible in the future,” he replied calmly as he sat down.

“Robbie…” She twisted her wrist this way and that, but he kept a firm grip on it. “You’re scaring me.”

“There’s nothing to be scared of. You’re going to be a little sore—well, make that a lot sore, but it won’t kill you.”

Sore? What was he talking about? To her shock Cassie found herself being pulled face-down over his lap. “Robbie! Robbie, stop!”

“Don’t say ‘stop’ before I’ve even started.” With that, a sound very much like a gunshot rang out through the room, followed quickly by her yelp of protest.

“Ouch! What are you doing?”

“I told you,” he said peppering the seat of her jeans with crisp, hard spanks. “I’m teaching you a lesson.”

“Naughty girls rarely do,” he replied as he continued to soundly spank her. “But even if they don’t like getting spanked, it does tend to make an impression, and that’s exactly what I intend to do.”

He was making an impression all right. An impression of his hand on her ass! Cassie began to squirm, but as his hand continued to warm up the back of her blue jeans she became more desperate and twisted and turned.

“That’s the whole point. Maybe your butt will hurt enough to make you think twice before you hurt other people.”

“I won’t! I won’t hurt anyone ever again—ever!” she squealed.

Before she could ask him what would convince him—she was willing to say anything to make it stop!—he shocked her by pulling down her jeans. “Robbie! What are you doing?”

“I thought that would be obvious. You deserve a long, hard spanking, Cassandra, and that’s exactly what you’re going to get.”

2017-04-09
Chris
Previous: Conquering His Captive by Ivy Barrett
Next: The Dragon’s Pet by Loki Renard