Her Master at Last by BJ Wane 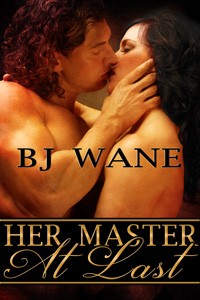 Over the years since she first met Jack Sinclair, Morgan Tomlinson has developed quite a crush on him. As a girl she swore she would marry him one day, and as a twenty-seven-year-old woman with her life seemingly spiraling out of control she rushes to him for comfort. When she ends up stranded at his mountain retreat during a snowstorm, Morgan knows this may be the best shot she will ever have to make Jack see that she is not a little girl anymore.

Though he is well aware that Morgan has grown up to be a beautiful woman, Jack is a demanding man with particular tastes which he fears would be too much for her. She proves determined to test him, however, and when she disobeys him one too many times Jack decides it is time to take Morgan in hand.

By the time she realizes she has pushed Jack too far, it is already too late, and before she knows it Morgan has been pulled over his knee for a painful, embarrassing, and very public bare-bottom spanking. Though the humiliating punishment shocks her, it also excites her in a way she has never felt before, and despite her blushing cheeks and sore bottom Morgan cannot help longing for Jack to master her completely.

Impressed by her response to his stern chastisement, Jack sets out to teach Morgan what it would mean to truly belong to him, and with each passing day she surrenders her body more fully to his practiced dominance. But when her wealthy, snobbish family seeks to destroy her blossoming romance, will Morgan run away from Jack as she has run away from so many things before in her life, and if she does, will he chase after her and fight to keep her?

Sitting down, Jack held her hands in a tight grip, glaring up at her. “I warned you, princess. I told you the time would come when you would have to face the consequences of your actions.”

With a jerk, Morgan found herself face down over Jack’s hard thighs. She wasn’t even allowed the small amount of modesty his shirt gave her as cool air hit her buttocks when he flipped the shirt up, exposing her to the entire room of strangers. Mortified, she screamed and struggled against him to no avail. “Let me up, Jack! I promise I’ll stay upstairs, just let me go.”

Holding her in place with one arm across her shoulders, Jack swatted one buttock hard, raising a bright red print. “No, and the more you fight me, the worse it’ll be for you. Would you rather I strapped you down on one of the spanking benches?”

From what she had seen, the equipment was all at one end of the room, with lights on them and even more people milling about, watching. “No, don’t you dare!” Just the thought of having her big butt exposed that way brought tears to her eyes. “Please, Jack, don’t.”

Jack almost relented at the teary plea in her voice, but hardened his resolve. It was way passed time the little princess grew up. “Ten, Morgan. And quit struggling or I’ll add to it.” He swatted her again, hard, raising a matching red imprint on the other cheek. She had a beautiful ass, soft and round, her pale skin blushing easily under his hand.

Mortification and chagrin turned to shock when he switched from hard smacks to soft, caressing strokes over her abused flesh and she discovered how the pulsing pain had left her wet and more than a little turned on. When he ran his fingers in a light, tantalizing graze over her damp, swollen pussy, she couldn’t suppress a low moan of need. The heat in her buttocks had spread to her pussy, much to her embarrassment.

Flipping the shirt down, he turned her over, cradling her in his lap as she buried her red face in his shoulder. She didn’t know what embarrassed her more, being spanked in front of people, or getting turned on by both the pain and the humiliation.

Regret settled like a heavy blanket over Jack as he cuddled Morgan’s soft body against him. He shouldn’t have punished her like that. Knowing she wasn’t in the lifestyle should have made him at least consider taking her upstairs and dealing with her in private. But he had been so pissed over her blatant disregard of his orders, he had let his anger overrule any considerations he might have given her. He tightened his arms around her when he felt her tears dampening his shirt and heard the slight hiccup she failed to disguise in his shoulder.

“Shh, princess. It’s over now and I’ve got you,” he murmured, her muffled sobs breaking his heart.

2016-03-06
+admin
Previous: Taking His Human Bride by Kelly Dawson
Next: The Highwayman’s Lady by Ashe Barker