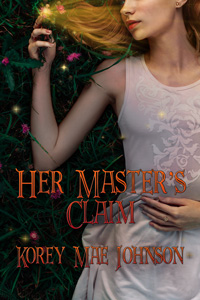 Charlotte didn’t volunteer to be born a witch—the last hope of an all-but-extinct race, no less—and she certainly never asked to be apprenticed to Ashcroft, one of the most powerful wizards alive. But though she is nineteen years old, as far as Ashcroft is concerned he is her master whether she likes it or not, and if it takes a painful, humiliating bare-bottom spanking to impress that fact upon her, then so be it.

Yet despite her best efforts first to escape him and then, failing that, to make his life a living hell with her attitude, Charlotte cannot help feeling her pulse quicken in Ashcroft’s presence, especially on those occasions when he takes her in hand. Even when she makes the mistake of challenging him directly—earning herself an incredibly shameful punishment which leaves her bottom sore inside and out—it only increases her yearning for him to master her in a much more intimate way.

Ashcroft knows it is his duty to train and protect his feisty ward, not have his way with her, but Charlotte affects him like no woman ever has before. Soon enough he cannot resist taking her long and hard, and his dominant lovemaking ignites a powerful passion in them both which deepens the bond between them. But he is not the only one with an interest in Charlotte… When an old enemy seeks her out, will Ashcroft’s knowledge and skill be sufficient to protect her?

He needed to spank her, not touch her, and get the hell out of the room. He couldn’t think at all rationally around her. He couldn’t even argue—his tongue was tied, but he glared darkly at her so as not to show it. He pointed at the bed. “I’m sick of bantering. You nearly got yourself killed. Now bend over the edge.”

Her face suddenly went blank—void of all emotion—and then she scooted back up the bed. “Look, isn’t this ankle-thingy bad enough?”

She quickly shook her head and looked toward the door and then back to him. “Ashcroft—it’s eight o’clock in the morning. And I’m still sore from last night! Don’t you think—?”

“But the servants know,” she whined, but she slid off the bed and stood in front of him. “They’ll be able to hear, and they’ll know!”

He turned her around and pushed her down so that she bent over the bed, her body in a perfect ‘“L,’” her bottom sticking out to meet him. He grabbed a hold of his belt. Her toes dug into the rug underneath her, her hands gripping the comforter under her body. “P-p-please, Ashcroft. Give me a break!” she pleaded, trying to crane her neck around to look at him. “I’m really, really sorry, and I promise I’ll make it up to Moriarty!”

He didn’t answer. In truth, he was barely listening. Through her shift he could see the rounded curve of her bottom, admiring how her soft legs draped out of the fabric.

“I’ll do anything if you don’t spank me again. Anything!” she continued, her voice turning squeaky as he tested the belt against his own thigh, checking for pliancy before he placed a strong, pinning hand against the small of her back.

“Anything except behave. Didn’t I tell you that there would be discipline if you did not follow my rules?”

2015-07-06
+admin
Previous: Her Officer in Charge by Maggie Carpenter
Next: The Doctor’s Little Ward by Ava Sinclair