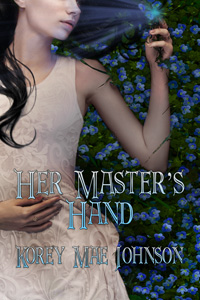 For two decades, Maili has lived as the adopted daughter of the powerful demigod who saved her life and healed her broken body, but at last the time for her to wed has come. Yet the very thought of marrying the cruel warlord to whom her guardian has pledged her hand fills her heart with terror. She flees from her home in desperation, but her bid for freedom is foiled by an encounter with a decidedly grumpy yet undeniably enthralling wizard.

Twenty years have passed since that fateful day at the Hatchet Cliffs—years that have taken a far greater toll on Ashcroft than all the centuries before—and the once proud wizard has been reduced to hunting dangerous beasts to sell their magical venom like a wandering merchant. Thing go from bad to worse when he inadvertently captures a beautiful, feisty young witch who happens to be on the run from someone with whom even an immortal of Ashcroft’s power would rather not tangle.

Though he is determined to return her to her adoptive father and then take his leave of them both, something about Maili captivates Ashcroft, threatening to smash through the barriers he has carefully erected to reach the place in his heart that only one other woman has ever touched. But aside from the fact that so much as kissing Maili would incur the wrath of the most powerful being in this region of the world, can he bear to risk his heart being torn to pieces again?

“Oops!” she cried just as the branch she’d been perched snapped on its hinge, and she came tumbling down. He reached up and caught her, although none too gracefully. For a moment it looked like she was about to practice swimming on air, but in the next, she spun around in his arms and looked dazedly at him. “Oh!” she said, finally voicing her surprise from being caught.

“Oh, indeed,” he gritted, thankful that he had caught her successfully and that she didn’t bang her head against one of the rocks jutting out from the water nearby. He stepped onto one of these stones and found himself throwing her over his knee in the same movement.

“Ashcroft, what are you doing?” she screeched, flailing her arms and legs.

He didn’t even know what he was doing. The brat kept on doing extremely dangerous things without thinking, and this was the only thing he could think of to do about it! “I told you I would tan your hide if you followed me,” he gritted, holding her wrists to the small of her back and heaving her forward. He pulled up her layers of skirts, and found that under her cloak she wasn’t all so dirty.

He was probably spanking her with his hand for three minutes before he realized that he had actually pulled her panties down to deliver the spanks upon bare flesh. He was so startled that, for a second, he stopped spanking her.

And then he saw the sweet, silky cunny between those kicking legs and he became mesmerized. The scent, it brought him back to—

“Ouch!” There was a sharp pain at his knee. She bit him? Of all the…! “I’ll teach you to bite me, you nasty little cannibal!” he snapped, his fury once again invigorated.

“This hurts!” she screamed at him angrily, her body shaking from the force of her words.

“If Hoel finds you with me, he’s gonna hurt me a lot more! Do you have any idea what he’ll probably think?” Hoel would probably think that Ashcroft had caused her to become infatuated with him or something equally damning enough to cause the demigod to kill him fifty times over!

Yep, pink wasn’t going to do—this bottom over his knee deserved to be red!

2015-08-17
+admin
Previous: His Willful Bride by Maggie Carpenter
Next: Her Cowboy Daddy by Dinah McLeod