Her Millionaire Master by Maria Monroe 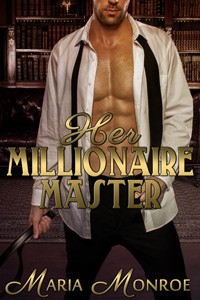 When graduate student Bella James agrees to house sit for her wealthy neighbor, Kane Calhoun, he makes it clear that he expects her to respect his privacy. After curiosity gets the better of her, however, she manages to spill the darkly handsome millionaire’s twelve-thousand-dollar bottle of scotch all over his desk while snooping around his office. Even worse, he returns home just in time to catch her watching videos on his computer… videos of him spanking a woman.

Kane is a man who knows how to get what he wants, and upon finding his beautiful neighbor in his office against his explicit instructions, what he wants is to bare her bottom and spank her soundly. When Bella offers to accept his stern discipline in lieu of reimbursing him for the damage she has caused, he makes her a deal. She will submit to a series of painful, embarrassing punishments, and that will be the end of the matter.

Though Bella quickly discovers that Kane’s plans for her include quite a bit more than just his firm hand applied to her bare bottom, she cannot deny that the intense, humiliating chastisements leave her more aroused than she has ever been before. She soon finds herself aching for Kane to claim her as hard and thoroughly as he has punished her, but can she really dare to hope that the dominant millionaire will put aside his own demons and truly make himself her master?

“Stand up, Bella. Take off all your clothes except your panties.”

She was so obedient, he thought, as he watched her stand up and begin to unbutton her shirt. He could see her hands were shaky, trembling as she fumbled with the buttons. In his seat he shifted, his cock hardening even more as he watched her take off her clothes. She dropped her shirt to the floor, revealing her breasts, pushed up by a lacy and skimpy bra. Cheap looking, but still sexy. When she reached back to unclasp it, her breasts pushed forward, and he inhaled, fighting the urge to get up and go to her, to feel her nipples between his fingers, to flick them, tease them, bite them. They were hard and dark pink, and it took all his strength to stay still, to ignore his throbbing cock. She unzipped her skirt, pushing it down and off, and now she stood before him in only her panties, a lacy black pair that wouldn’t stay on for much longer.

“Good girl,” he said, standing up and taking two long strides until he stood directly in front of her. “I am going to see if your panties are wet already. Is that OK?” He stared into her blue eyes, daring her to say no.

“And what will I find when I touch you?” he whispered into her ear, smelling the sweet scent of her shampoo, wanting to kiss her soft skin but resisting. That’s not why she was here. Instead he pulled the elastic band of her panties gently so she took a step even closer to him.

He pushed her legs apart, then reached two fingers between them, rubbing them against her pussy through her panties. The fabric was, indeed, warm and damp. He withdrew his hand and nodded at the bed. “Bend over the bed for me, Bella.”

Fear glinted in her eyes as she nodded, then walked to the bed and lay her top half on it. This, he thought. Bella bent over the bed, waiting for him to punish her, and soaking wet because of it. This was the hottest fucking thing ever. From behind she was gorgeous, her skin so pale. The way her ass stuck out at the end of the bed made him curse under his breath. And her hair, blond and thick and wavy. So soft. So smooth. Falling in waves over her shoulders and onto the red silk comforter beneath her.

He stalked to the bed so he was standing right behind her. He was wearing jeans with a belt, and a white dress shirt, unbuttoned. Bare feet.

“Bella,” he said, keeping his voice low but steady, “tell me what you hear.”

He unbuckled his belt, the frame and prong clinking against each other as he pulled it out through the belt loops of his jeans.

She gasped, a small sound, and tried to cover it with her arm. But he’d heard it. “Spank me with it?” she whispered.