Her Rogue Knight by Natasha Knight 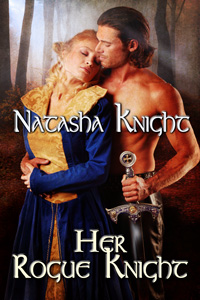 Since her mother’s death, Gemma has raised her younger sister Alys and kept her family safe… until the day they are caught by surprise and Alys is taken by a band of outlaws. In desperation, Gemma’s frail, elderly father pleads for aid from a reclusive knight by the name of Sir William and pledges him Gemma’s hand in marriage in repayment for the safe return of her sister.

When Gemma ignores her father’s instructions and sets out on her own to rescue Alys, she discovers that this gruff, unkempt, and yet undeniably handsome brute is more than her match, and the lesson is brought home with a sound spanking on her bare bottom. With no time to waste taking the brave and feisty yet hopelessly naïve eighteen-year-old back home, Sir William has no choice but to bring her along as he pursues her sister’s captors. Though he might not admit it, however, he relishes the thought that he might have to punish her again, and with every glimpse of her delicious curves his lust intensifies.

In spite of his firm chastisement and his demand for her unquestioning obedience, Gemma finds her feelings for Sir William evolving rapidly. She begins to wonder what it would feel like to be stripped bare and held tight in his strong arms, helpless and blushing, yet longing for him to claim her hard and thoroughly.

Even as her desire for him grows stronger, she frets about the secrets he keeps from her. His skill in battle alone tells her that he is no mere woodsman, and the hilt of his sword bears a marking that cannot be mistaken—a symbol that she believed had passed into legend. Can she trust this man with her life and that of her sister? Will he fail her in her hour of greatest need, or will her rogue knight prove himself worthy of not only her submission but her love as well?

“Oh, Sir William! I’m so happy to see you,” she began. “How did you find me?” she asked, watching his face as he approached her. His unsmiling face.

Without a word, he set his sword down against a nearby post and came to inspect her hands, her wrists, her neck.

“If you’ll lift it off, I can move again. This is the worst thing… what are you doing?” she asked when he went behind her.

“You could have been killed,” he said, his voice tightly controlled. “And have you considered what you have cost your sister?”

She gasped when in the next instant, he raised the back of both her dress and her shift high and tucked them inside the neck of her corset.

“What are you doing?” she asked again, her voice quiet, unable to turn her head to see. She now stood trapped in the pillory, that alone humiliating enough, but with her back bared—her bottom bared—she felt absolutely undone.

“Do you have any idea what your stubborn actions could have cost?” he asked.

She heard the sound of him releasing his sword belt.

“Sir William!” she yelled, her skin prickling with the realization of what he was about to do. “No, please!”

She hadn’t even processed the sound before leather burned its mark on the flesh of her bottom, the lash wrapping painfully around her hip. Gemma screamed with the stroke, trying to free herself but unable to.

“What will it take?” he began, striking again.

“Please!” she begged when the next one seared her bottom.

“For you to learn,” he continued, ignoring her cries altogether as he lashed her again and again. The next two lashed against her sit spots. Although the leather just touched her sex, the sting of it was so painful on so sensitive a spot that she felt as though she would pass out.

But she did not as he laid another six out, these on the backs of her thighs.

Gemma screamed with each stroke, and it was her only outlet since she was unable to move, trapped as she was. Her voice came out strange, uneven as she gave herself over to her punishment.