Her Rogue Viking by Ashe Barker 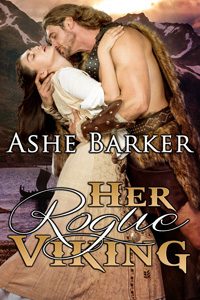 Though Fiona puts up a brave fight when her village is raided by Vikings, she ends up being carried off over the broad shoulders of Ulfric Freysson, the leader of the Norsemen. The stern, ruggedly handsome warrior quickly makes it clear that she belongs to him now, and her best efforts to escape merely earn Fiona a painful, humiliating switching on her bare bottom.

Her captor’s bold dominance sets Fiona’s passion ablaze, and when he brings her to his bed she cannot help begging for him to claim her completely. As Ulfric begins training her to please him in any way he demands, Fiona finds herself falling in love with her new master, but she soon realizes that there are those among his people who still see her as an enemy. When her life is threatened by a member of his own family, will he stand ready to protect her no matter the cost?

Publisher’s Note: Her Rogue Viking includes spankings and sexual scenes. If such material offends you, please don’t buy this book.

“Sir? Ulfric? I have never… please, not there.”

“No, of course not there, not this time. But soon…”

He moved on, now slipping his fingers lower to explore between her soft folds. Her soft and very moist folds.

Yes! He had known it. The Celtic wench might well be embarrassed and apprehensive, her mind recoiling in aghast horror at his bold and intrusive touch but her body was eager enough. She even parted her thighs for him, perhaps not realising what she was doing.

Still reaching around her, Ulfric spread her lower lips from behind and slid his fingers along the length of her slit. He stroked gently, back and forth, smearing the copious moisture on his fingers, then bringing it back to her puckered anus. This time when he pressed, the tip of his finger entered her. She squeaked, and he withdrew. It was enough.

He reached around and beneath her with his other hand, this time seeking her most sensitive little bud. He found it, already swelling and deliciously plump, and started to draw his fingers back and forth across the very tip. His touch was slow, lazy almost, but he knew exactly where to concentrate the sensation for the most devastating effect. This was her first time, he was sure of it. He would make sure she did not forget what he could do to her if he chose. If she earned it.

Fiona groaned, writhing against his hand. He did not believe she was even aware of her actions as he built the pressure, his unerring caress drawing out a response he was quite certain she had no idea might be lurking.

“Ulfric, what is happening? What are you doing?”

“I do not know,” she answered, her tone one of pure dejection. “It feels… strange.”

“No,” she conceded miserably.

“And do you wish me to stop?” He had no intention of doing so, but was interested in her answer even so.

She did not offer a response at once, but wriggled her hips as she sought to angle her clit for better access, more friction. Ulfric rolled the sensitive nubbin between his finger and thumb before he repeated his question.

“Fiona, do you wish me to stop?” He squeezed softly.

“No. No, do not stop…” The words were wrung from her, a desperate, anguished moan as her first climax coiled and unfurled deep within her. She grasped his tunic with her still-bound hands and hung on to him as though afraid he might even now slip away.

“Do not fight me, little one.”

2017-04-02
Chris
Previous: Head of Household by Lily Harlem
Next: For His Pleasure by Vonna Harper