Her Russian Bears by Ava Sinclair 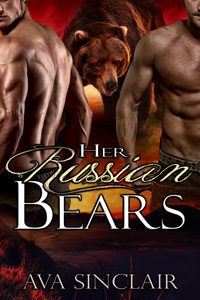 When US Fish and Wildlife Service agent Jordan Rowe is sent to Russia to investigate the smuggling of a huge bear into the United States, she has no idea what is in store for her.

Upon reaching the remote Kamchatka peninsula, Jordan meets wealthy businessman Mikhail Barinov and his cousin Dr. Ivan Kolov. The men quickly prove to be as infuriating as they are attractive, but when she pries too deeply into their affairs Jordan ends up in way over her head.

Mikhail and Ivan are among the last of an ancient race capable of shifting between man and bear, and they will do whatever is necessary to protect their secret. More alarming still, both men are on the verge of being consumed completely by their wild natures. In order to avoid losing control they must claim a mate as soon as possible, and they have decided that Jordan will be that mate.

Though Jordan is far from ready to submit to one stern alpha male, let alone two, Mikhail and Ivan’s bold dominance leaves her burning with need and when an act of disobedience earns her a painful, embarrassing bare-bottom spanking she cannot hide her helpless arousal. In spite of her situation, Jordan soon finds herself falling in love with both Mikhail and Ivan, but can she trust her Russian bears to keep her safe in this dangerous land?

Publisher’s Note: Her Russian Bears includes spankings and sexual scenes. If such material offends you, please don’t buy this book.

“You were told to stay in this room,” he said. “You disobeyed. And now you must be punished.”

Punished? She stared blankly up at Mikhail, but had little time to ponder the word before being dragged over to the bed. The huge Russian sat down, pulling her across his lap. She screamed in outrage at what happened next. She could feel his warm fingers looped in the waistbands of her pajama pants and panties, could feel them being jerked all the way down to the tops of the boots she still wore.

“Let me go, you fucking animal!”

If he was going to molest her, she wasn’t going to make it easy for him. In her draped position, her head was level with his calf. She reached for the hem of his pant leg, raised it and sank her teeth into the side of his leg as her fingernails scored his skin.

She was rewarded with a word bellowed in Russian, but then came the crack of a slap and an accompanying searing pain that seemed to suffuse her entire bottom. Jordan screamed but kept her grip, but not for long. The Russian was spanking her. Hard. The blows were strong and sharp. They both thudded and stung, the pain burrowing into the deepest layers of her skin.

Jordan heard the sounds of crying and realized the pitiful wails were her own, but her punisher was unmoved and unrelenting. Through her peripheral vision, she could see his hand rise and fall, and she began to cry out for mercy. But Mikhail Barinov remained stoic. His face was a disciplinarian’s mask—his thin mouth a grim line, his dark eyes cold and unsympathetic. The fullest part of her bottom felt as if it was on fire, and her agony was only compounded when he continued the assault on the softer skin lower on her buttocks. It was worse here, and Jordan kicked and writhed and rocked back and forth, vaguely aware that her wild bucking motions were making for a tawdry display.

When her struggles became too exhausting, and her bottom cheeks were so sore that she could not even clench them without pain, only then did the hard, punishing hand come to rest on the throbbing surface of Jordan’s bottom. She was limp over his lap, aware now of the thickness of the hard thighs she was draped over, of how petite she was compared to him. What the hell had she been thinking, coming back here? What the hell had she been thinking, snooping around?

Her ass felt like it was on fire, and she could see the floor under her face was wet with her own shed tears. And then Jordan was aware of how quiet it was, save for her own pathetic hitches of breath. And she was aware of something else, the sensation of the Russian’s huge hand resting on her freshly spanked bottom. She froze and slowly looked back at him.

“You will behave now, no?” The question was accompanied by a light but proprietary squeeze to her right nate that sent an unexpected current of warmth through her body—an unexpected sensation that condensed to an embarrassing throb between her legs. Pleasure. She could not deny that was what she felt, and the shame of this was almost worse than the spanking.

Am I wet? The thought horrified her, for she was sure she felt the dampness collecting in her pussy. She squeezed her legs together, lest he somehow sense it. That only made the feeling more acute.