Her Shameful Training by Emily Tilton 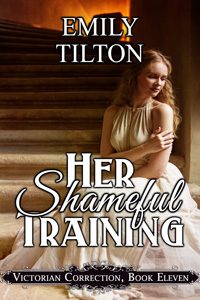 When Lord Stephen Gaithwait takes an interest in Joanna Middleton, the beautiful eighteen-year-old runaway soon finds herself held captive at his estate. Before long, she has been stripped bare, put on shameful display, and sternly punished for failing to obey the strict gentleman promptly.

After the unexpected intervention of Dr. Brown, it is decided that in order to assess whether Lord Stephen is the right man to train Joanna, the esteemed doctor will examine her thoroughly and then observe as she is claimed, used, and enjoyed in the most humiliating ways imaginable. By the time her ordeal is over, Joanna will be left in no doubt that her body belongs to her master.

Another mewling sound came from her throat, and though part of her wished to deny him the satisfaction of any response, her need to know what he meant seemed to come from her body itself, an impulse she simply could not resist.

The servant spoke in a stern voice. “You will show his lordship the proper respect, girl, or feel the cane across your backside.”

“What?’ Joanna gasped, twisting her face again to try to look a plea into the eyes behind the black mask. At the same time, she felt her bottom go tight at the thought of the cane and she felt herself… her young cunny, her inwardly blushing mind whispered… flutter strangely and distractingly, as if something about the way the nobleman had touched her there had somehow changed the way her body responded to all these shameful things.

“You will call your master my lord, Joanna,” the man said, as the nobleman himself looked steadily back into Joanna’s eyes. “Or your bottom will pay the price of your disrespect.”

The nobleman still held the strap in his right hand: she could feel it resting gently against the sole of her left foot. His other hand had returned to the small of Joanna’s back, where it seemed to steady her on the bed, promising more terrible pleasure or more agonizing punishment as the man should choose: that hand would hold her in place with the greatest ease, and ensure that the nobleman might do exactly as he pleased with the naked girl he had placed so thoroughly at his mercy.

The strap moved against her foot, and for a moment Joanna thought she would feel it across her upper thighs again, teaching her more of the awful lesson in submission he had begun to give her. But the nobleman, still looking into her eyes, only tapped her bottom gently with it, so that she whimpered in fear, and said, “Must I cane you, Joanna?”

“I am very glad to hear it,” the nobleman said, his lips curling up into a smile whose full meaning Joanna could not discern, because she could not see the upper part of his face: it might have held cruelty, or kindness, and her ignorance of the man’s mind made her heart race. “You will learn what it means to spend in a short while, have no fear. We must first speak of your training, and I must enlighten you rather farther than it seems Mrs. Mund did, as to the way of a man with a maid.”

The smile changed, one side going up further, and now despite not being able to see the nobleman’s eyes Joanna thought she could determine that he felt real pleasure in her reaction to his alarming words. The idea of her abductor’s enjoyment in this process he termed ‘enlightenment’ had an odd effect upon Joanna: it frightened her even as, for reasons she shied away in abject embarrassment from contemplating, it made the warmth grow, helplessly, in the places he seemed in some awful fashion to have awakened by his touch.

2019-01-06
Chris
Previous: The Predator’s Pet by Vonna Harper
Next: Taken as Theirs by Kryssie Fortune