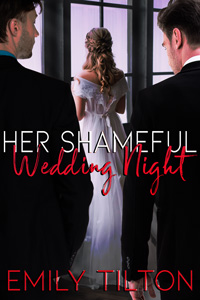 When she is sent to a Selecta-affiliated clinic for a pre-marital examination, eighteen-year-old Zoe Ralston has no idea how humiliating the visit will be. Her embarrassment is only heightened by her inability to hide her helpless arousal—or the accompanying wet spot on her panties—as she is stripped and inspected, and to make matters worse, Zoe’s failure to cooperate fully with the nurse earns her the first spanking of her life over her firm-handed future husband’s knee.

Having her bottom bared and punished leaves Zoe quivering with need and ready to be claimed hard and thoroughly. But when her fiancé makes it clear that he intends to share his blushing new bride with his groomsmen and all of them will be using her in any way they please, will Zoe call off the ceremony or surrender to her body’s demands and enjoy her shameful wedding night?

She nearly swooned, then, like an old-fashioned heroine. He knew what had happened at the clinic, and he must know, too—maybe even better than Zoe did herself—what it meant. The thought of telling him to get lost, that the wedding wouldn’t happen, vanished, replaced by the idea that she had to get it over with. Her fiancé, a man who knew how to keep a girl in line, had decided she needed a spanking over his knee with her panties down; now she had no choice because if she didn’t do as he said he would make her sorrier. He would buy a paddle or a strap, and he would put her not over his knee but over the chair, or the stool, or the arm of the sofa, and he would make sure she didn’t sit comfortably for a day or two.

Her breath came in little pants. Her knees trembled. She had to get it over with.

“Yes, sir,” she whispered, and Bradley started to pull down her pants.

“Oh,” he said, and she knew he had seen the panties. The white lacy panties Zoe had put on when she had gotten home from the clinic: one of the three pairs she had bought for the wedding night and the honeymoon, not sure which ones she would wear when—not even sure in fact that she would have the courage to put them on at all, since she had never worn real lingerie before, and her gray thong had been until then the naughtiest underwear she owned.

Bradley kept pulling her jeans down until he had them around her knees. Zoe peeked through nearly closed eyelids, then, to see that he had begun to study the place between her thighs that the lacy front of the thong panties covered. The cotton of her shirt hung down far enough to obscure a good deal of the region from sight, but she knew he had noticed the whiteness and the design.

Had he realized that his fiancée had been bared, down there, that day, by the nurse’s clippers? That the pussy he meant to uncover for the first time had no hair on it because Nurse Carter thought a bride should look fresh and tidy for her bridegroom, in the place she must have his hardness when he decided the time had come to make a woman and a wife of her?

“You’d better take your top off, Zo,” Bradley said in a thick voice. “When your husband disciplines you, it’s not a time for modesty. It’s important that I see what I like to see.”

A sob broke from her throat. Where had his words come from, these words that seemed to look down deep into a part of her soul she had hardly even known she had. Swiftly, trying not to think about it, she obeyed her fiancé: she took the hem of the pink shirt and pulled it off over her head, all the way, so that she could drop it to the floor and Bradley could see the lacy white bra that matched the panties. Zoe had followed Nurse Carter’s advice, though she had never gotten used to how bras felt, encasing and presenting her little breasts.

“You’re so beautiful, Zoe,” Bradley said softly. That made her open her eyes, to see him glance up from her pussy to her face. “And you’re being such a good girl, now.”

Zoe bit her lip as he moved his right hand around behind her, and took both her bottom-cheeks into his long fingers, holding her backside as if to remind her that she had just been spanked over her fiancé’s knee and would very soon return there for the rest of her obedience lesson.

2019-11-24
Chris
Previous: Wolflord: A Dark Shifter Romance by Delta James
Next: Under His Protection by Isabella Laase