His Blushing Bride by Emily Tilton 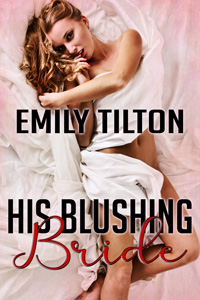 Sam Hunter never thought of himself as excessively stern, but when his new bride pushes him too far with her sharp-tongued defiance she soon finds herself sobbing over his knee as her bare bottom is very thoroughly spanked. The humiliating chastisement leaves her with blushing cheeks and a burning backside, but the real lesson will be taught in a far more shameful fashion.

For nineteen-year-old Mary Johnson, the only thing more embarrassing than her husband’s strict correction is her inability to hide her helpless arousal as she is punished. But no matter how desperately she begs, she will still be claimed in just the way a naughty wife needs to be claimed.

Publisher’s Note: His Blushing Bride includes spankings and sexual scenes. If such material offends you, please don’t buy this book.

“I know you don’t want it in your bottom, Pixy. But you’re being punished, now. You need to learn your lesson.”

Mary gave a little sob, and then that sound became a long moan because Sam moved his hand to her pussy, and he made her feel, between her legs, what it meant to have a husband who knew his rights and would use them. He put two fingers on the shaven hood of her clit, and he gripped her firmly. He put his thumb on her anus and she cried out as he pressed there to tell her without words that her little hole belonged to him and he would do with it as he pleased—especially if he could teach her to be a good girl that way.

Did she want it in her bottom, after all? Mary moved over the pillow, in response to Sam’s rough caress, positively starting to ache now, between her legs. She knew that she wanted—no, needed—her husband inside her. Not the respectful way he had deflowered her on their wedding night. No, the brutal way he had taken her on Sunday after the spanking, every thrust a message about his authority and her subservience.

But she found her hands going back behind her, because she wanted to feel them on her whipped cheeks. She took the little globes in her hands, so warm from her husband’s belt, and she cried out because the jolt of pleasure that went through her midsection almost made her climax all on its own. Her face now resting on the sheet and her hands behind her, she rode Sam’s hand lewdly, desperately.

He turned his attention back to her face, and she saw him smile at the same time she felt him squeeze her pussy hard, and drive his thumb into her bottom-hole so firmly that Mary felt like an object, like a six-pack of beer picked up casually by a working man’s strong hand. She came, looking into his eyes, crying out, jerking and writhing over the pillow where her husband had put her for discipline and enjoyment. The silky nightgown fluttered around her hands in her struggling, as she clutched her well-whipped backside and showed Sam the naughty, wrinkly little hole where he meant to use his bride for his pleasure and her training in submission.

Still smiling into her eyes, he used his huge hand to make Mary come again. He pushed his thumb even further into her bottom-hole, and she realized that at some point he had covered it with the lubricant men use when they decide to fuck an anus. She sobbed at the thought, bucking against Sam’s hand and impaling herself still further on the lewd digit he imposed on her, for her misconduct.

Two of his other fingers, thick and strong, moved down from her clit so that he could enter her pussy with them. He pressed into her vagina urgently and finger-fucked her hard while his thumb in her bottom invaded her even deeper.

Mary screamed, and came again, her mouth open and gasping, her eyes wide and her tears forgotten. Sam’s smile seemed hungrier with every passing second as he bent her to his will and saw how his modest bride responded to his utter dominance. Mary watched his left hand move out toward her, felt it come to rest on the back of her head and twine its fingers in her hair.