His Blushing Plaything by Emily Tilton 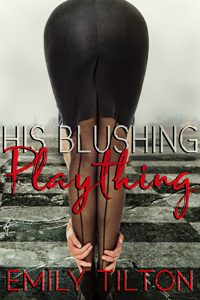 When she is chosen by a powerful executive to participate in a high-stakes competition waged within her company, twenty-one-year-old Natalie Smith has no idea what to expect. It is only after her hesitation to strip and present herself for a humiliating inspection ends up earning her a painful spanking that Natalie begins to realize how incredibly shameful the event will be for her.

Natalie will be bared and displayed before an attentive audience, and as the contest progresses she will be punished, used, and enjoyed by her stern, handsome partner and sometimes even rival players as well. What truly leaves her blushing, however, is the knowledge that she will not be able to hide her helpless arousal as her quivering virgin body is publicly claimed and mastered.

Natalie’s mouth opened and a little sobbing moan came out, and then a sharp breath, and then she felt like she had the presence of mind and the control over her voice to say, “Yes, sir.”

Now Javier moved very quickly: his right hand went from her hip to her shoulder, and though she tried to push back, because she needed his hardness inside so very much, she didn’t gather her strength fast enough to move her bottom more than a fraction of an inch. His hips slammed into her, and his cock went deeper than it had yet, so deep it almost hurt, but not quite—and in a completely different way from the pain of his taking her virginity. She cried out, but he had pulled out again, and then pulled her back against him hard, and now he fucked her in a driving rhythm, thrusting his rigid length all the way inside every time then taking it almost completely out, and before she even knew what it felt like Natalie had started to come.

The release and the ecstasy were so powerful that for an instant she wondered whether it even was an orgasm, or something else—maybe even something dangerous. The waves of pleasure that swept through her whole body didn’t seem to have anything to do with the tiny little starbursts she had achieved in bed with her urgent fingertips on her clit.

But Javier put his left hand underneath again, between her legs, and the new addition to the sensation seemed to connect the shudders in the rest of her body with the extra pleasure from that aching center, the little nub he seemed to know exactly how to caress, firmly and then gently and then firmly again. Natalie just hadn’t known how much more there could be, when a man held her in place and fucked her hard, or how it could go on and on until she felt herself just an animal in heat, needily moving her bottom in acquiescence to the demands of her master.

He pulled out, and he moved his hand from her shoulder to press down on her back and make her move her backside in a very specific way. He made her yield herself without words, and then, to her shuddering embarrassment, but also to her whimpering arousal, he spoke.

“Reach back and hold your bottom open for the cock, honey. Show me your little asshole. That will make it easier for me to open you up.”

While he had fucked her hard, she had felt her whole body relax—especially her face, which had grown terribly tense, with bitten lips and furrowed brow and wrinkled nose, as she passed through the mental stages of beginning to understand the shameful parts of her that had remained in the dark for so long. Now, as she contemplated his command, she felt her forehead crease so deeply, her head ached with it.

“Answer me when I give you an order, Natalie. You know what to say.”

She could hear him pumping his cock in his hand. She heard a tiny snap, too, and with a blaze of heat in her cheeks she realized it must be lube: he had lube ready, somewhere, for the convenient enjoyment of a girl’s backside.

She couldn’t help it: she had no choice, did she?

“Do it, honey. I want to claim you. I want to fuck that tight little ass. Hands behind you, now.”

She had never imagined that anything could feel as shameful as it felt to reach back, adjust her body’s position so that she could stand bent over that way, and to take her bottom, the smart of the spanking now almost gone, into her hands. To spread it for her boss… for her boss to fuck.