His Blushing Rose by Emily Tilton 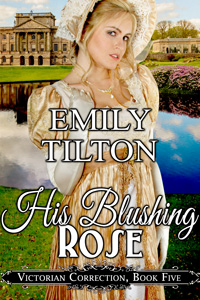 When she comes of age, it is made clear to beautiful, innocent orphan Rose Hale that she will soon be required to surrender her innocence to the esteemed gentleman Julius Summersby, a suitor personally selected by her guardian. Though she is initially delighted to be courted by such a powerful, handsome man, it isn’t long before Rose is shocked to find herself stripped bare and put on shameful display during an outing with her future husband.

Rose’s reluctance to submit to Julius’ demands earns her a painful, humiliating strapping on her bare bottom, but his mastery of her body arouses her intensely and she is left longing for more as he claims her in every way.

Despite his strict discipline, Rose looks forward to the day Julius will make her his bride, and she jumps at the opportunity to take up residence nearer to him. But when she arrives in London, Rose discovers that his plans for her have changed dramatically and she will be no more than a mistress. With her reputation already all but ruined, can she dare to hope that a better man will rescue her?

Publisher’s Note: His Blushing Rose includes spankings and sexual scenes. If such material offends you, please don’t buy this book.

Julius had said… he had said he would spank her over his knee for making the noises she couldn’t help making, when he touched her in that wicked way. Why did Rose feel that it was only right that she be spanked for what he had done, for this strange liberty he had taken? Why did she long now to go over Julius’ knee with her bottom bare, and feel his firm hand teaching her that modest young ladies didn’t make such sounds, or feel such pleasures?

“You were very slow to obey me, Rose,” Julius said now, “when I told you to get undressed so that I may have my way, and fuck you as your guardian has given me permission to do. I shall whip you now, and perhaps next time you will remember what happens to girls who don’t do as their husbands tell them.”

A whipping in the Sacred Grove, with Isabelle and Geoffrey nearby, didn’t have the same warm allure in Rose’s mind that the picture of herself over Julius’ knee for a spanking did, but she felt that the logic had a hold on her nevertheless. “Yes, sir,” she whispered to the grass.

“Arch your back and present your bottom, darling,” Julius said. “Whenever I whip you, from this moment on, you will always show me thus that you know your need for correction.”

Rose knew how to present her backside, because Mrs. Tuchet had the very same requirement. It made her face blaze much hotter, though, to have to present her little cheeks to a man that way. And what had Captain Merton said, about getting into their cunnies, and spending in their anuses? And fucking their tight little bottoms?! She felt that if she could just ponder the things she had already seen today, she might be able to figure out what it all meant, and what husbands did to wives, but her mind shrank away from the thought with a hot inward blush, and Mr. Summersby clearly had no desire to allow her to ponder anything now but his authority.

He put his left hand on her waist, and she felt the leather of the strap tap against her bottom. She couldn’t suppress a little cry of alarm.

“Push this further out, Rose. Offer it to me as you should.”

Beside her, Isabelle gave a sympathetic whimper. “Please, Mr. Summersby,” she said.

“Hush, Isabelle,” Captain Merton responded. “Rose is getting what she deserves, just as you will, very soon.”

With a tiny sob, Rose tried to obey, feeling that she put on a more shameful display now than Mrs. Tuchet had ever required of her or her friend. She knew that pushing her bottom out let Julius and Geoffrey see not only her cunny but her little bottom-hole, too, and again she wondered about the getting in on which the gentlemen seemed to have resolved, for after the whipping. And… Rose remembered another word, now: deflower. Her cheeks grew hot at the thought, though she still could not have said why.

The strap left her bottom, and then, almost immediately, she heard it whistle softly through the air and then crack into her tender globes. She gave a loud cry as the pain built and built, but her suitor did not relent in the slightest and, like Mrs. Tuchet, whipped her hard and fast, holding her down with his left hand though she struggled and tried to rise, thinking wildly that she might beg him to wait a while before he punished her more.

“There you go, darling. There you go,” he said so softly that she nearly couldn’t make out the words through her sobs and yelps. “That’s what naughty girls get.”

2017-02-12
Chris
Previous: Theirs: Found and Claimed by Ashe Barker
Next: Taken by the Alphas by Loki Renard