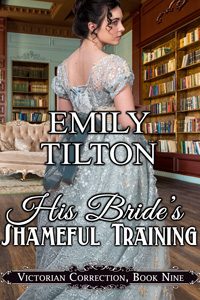 Eighteen-year-old Leticia Stewart will soon be married to Sir Henry Vexin, the strict gentleman who has been her guardian since she came of age, but first she must be properly trained. Though Sir Henry’s plans for Leticia will often leave her blushing with shame, she will also frequently find herself quivering with need as her beautiful body is thoroughly and skillfully mastered.

To help prepare his young bride for her new role, Sir Henry enlists the aid of Dr. Reginald Brown, and when Leticia refuses to undress for the respected physician’s examination she is soundly spanked. But it is only after she is caught in a scandalous act with her beautiful young maid that Leticia truly learns what it means to be punished in the most intimate way possible.

With a tremendous final spank he ended this first correction, and began to rub the lovely, rosy bottom with firm circular motions, still holding Leticia motionless. His girl must learn to accept exactly what he decided to do with the very special region between her waist and her knees, whether the lesson came in the form of a flogging or a caress.

Leticia moaned in a low, lewd voice as her bridegroom held her warm bottom-cheeks. Unable to help himself, wanting to make as clear as he could to the girl how thoroughly he meant to rule over her, Sir Henry moved his caress down and in, rubbing more softly now, fondling her most intimate places possessively.

“Oh… Sir Henry… please… don’t do…” Her voice came in little gasps, and the struggle of her hips changed from the defiant attempts to escape to a wanton riding, bucking motion, as if she could not repress her need for the most lascivious possible lesson the baronet could give.

“Hush, Leticia,” said Sir Henry. His fingertips found the naughty furrow where she had learned to play, rubbed gently in the soaking slit, moved further to touch the sensate bud that he knew she must think so enticing and so troublesome. “This cunny belongs to me, now. The doctor will examine it, and we will take the necessary steps to train you properly. Then I will fuck you here, and…” He moved his thumb a little, to press against the sweetest button of an anus he had ever felt. “Here, too.”

Celia, behind him, gave a pleasing little gasp. Leticia’s whimper, as the ball of his thumb entered her tiniest passage a very short distance, gave Sir Henry just as much satisfaction.

“But…” Celia said, her voice very faint. Leticia for her part could only wriggle her bottom, clearly beset with too many confusing feelings to allow for coherent speech.

“Anal intercourse,” the doctor said, “represents the most significant act of mastery that a man responsible for a young woman—or, in this case, two young women—can perform to teach them of his right of the phallus. Sir Henry means to claim that right over both of you, and I am satisfied that he intends to provide for you in the fashion a natural man does, according to his means, for the girls he enjoys. You are very fortunate to have a master so well endowed with worldly goods—you need fear no want, as you accept his rightful dominion over your body and receive the training he wishes you to have in how to please him.”

This discourse left Celia speechless. Nor did Leticia find any words with which to frame the lewd feelings Sir Henry continued to incite with his knowing fingers between her thighs, twined in the sweet curls, gently soothing her tiny clitoris. Her sighs and the little movements of her well-spanked bottom told him, though, that she had heard what the doctor had to say.

“Shall we proceed to the examination, then, Sir Henry?” the Scot asked.

“By all means,” the baronet replied, though he gave up his hold on Leticia’s hip and his exploration of her cunny with the greatest reluctance.

“Both of you on your backs, now, across the bed,” said Dr. Brown. “You will raise your knees and hold them open for me, if you please.”

2018-06-02
Chris
Previous: His Captive Kitten by Measha Stone
Next: The Power of the Pack: A Shifter Menage Romance by Maggie Ryan and Shanna Handel