His Caged Kitty by Alta Hensley 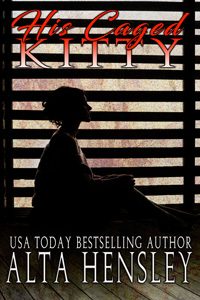 I left Earth hoping for a new start on an unspoiled world, but what I found was a savage land where men command and women obey. Stolen from my transport before I could even reach my destination, I barely escaped with my life, and now the man who took it upon himself to protect me has claimed me as his property, his pet to use and enjoy as he pleases.

I fought him at first, until he bared me, spanked me, and showed me what it truly means to belong to a dominant man. Punished, humiliated, and wearing nothing but a collar and a tail, I cannot help longing for him to make me his in every way, to master my body completely and keep me forever as his caged kitty.

Publisher’s Note: His Caged Kitty includes spankings and sexual scenes. If such material offends you, please don’t buy this book.

“I have to get my other finger wet with your juices for your punishment. Be a good little kitty and spread your legs wider.”

Why did he have to have his finger wet with my arousal for a spanking? His command didn’t make any sense to me, but I spread my legs regardless.

Erik lowered his hand and rubbed his finger along the folds of my sex, collecting my wetness once again. When he did so this time, he made sure to run his fingertip across my clit and press lightly.

I gasped as a bolt of electricity shot through me. I instantly wanted him to do it again, but instead, he moved his finger to my anus and rested it on the outside of my hole. I tensed immediately, not sure why he would touch me in such a way.

“We don’t want to wake everyone up with the loudness of a spanking, so I’m going to give you a silent punishment for your behavior. Your master is going to punish your bottom hole.”

My bottom hole? How on Earth would he…

Answering my internal question, Erik pressed his slick fingertip past my puckered hole in one effortless motion.

I squealed at the invasion, and would have been louder had his finger not been in my mouth.

“Shhh, little pet. Be a good kitty and take your punishment without waking everyone. If anyone’s sleep is disturbed, then I will spank you again.”

The threat of another spanking forced me to hold back any loud shouts of protest. I had no choice but to succumb to his invasion of my most intimate spot or risk a blistering on my already tender behind.

His finger went in deeper, and although I whimpered lightly from the bite and sting of the penetration, I did control my verbal response.

“That’s a good pet. Allow your master to stretch your naughty little hole. Suck on my finger while I teach you your lesson.” I did just as he asked, feeling a sense of pride when he praised me and called me good pet.

In and out, he pumped his finger. His movements were slow and even gentle. His finger inside of me felt so much larger than I knew it to be, as it forced my body to accept him. It hurt… but it also felt good. I wondered if moans like Rue’s would soon escape my lips. Was it just a matter of time until Erik was mounted on top of me, thrusting his member inside this hole rather than his finger? Is that what mating would be? The thought of him doing so both terrified and fascinated me.

Just as I felt I couldn’t take any more, Erik slowly pulled out his finger.

He kissed my cheek and then removed his other finger from my mouth. “That’s enough for tonight. You have a tight little hole that needs extra care. But with time, we will get you ready to take all of me there. It will all be part of your training. If you behave the rest of the trip, I may start off with a tiny tail rather than a large one.” He kissed me on the cheek again.