His Caged Mate by Morganna Williams 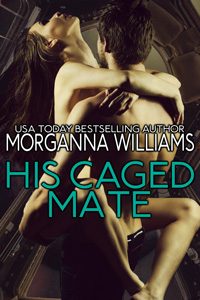 When Commander Barrick Andel first set eyes on Ryia she was naked in a cage, held captive by a haughty prince, and at that moment he knew the beautiful, fiery huntress was destined to be his. But despite his intent to return Ryia to her world to avoid the risk of war, her wanton disregard for propriety soon forces Barrick’s hand, and he takes her over his knee and spanks her soundly.

The shameful chastisement merely leaves her need for him burning even hotter, however, and before long Barrick has cast aside diplomatic protocol and claimed Ryia savagely. But taming his mate will require more than just ravaging her thoroughly, and by the time he is done she will be begging for mercy as climax after painfully intense climax is ripped from her helpless body.

Publisher’s Note: His Caged Mate is a stand-alone sequel to The Hunter’s Mate. It includes spankings and sexual scenes. If such material offends you, please don’t buy this book.

Ryia breathed a sigh of relief when his assault on her left ass cheek finally stopped, only give another cry of dismay when he began to apply his hand in the exact same way on the right cheek.

Her feet began to drum on the mattress as he punished her thoroughly. When he finished with that cheek, he began to spank back and forth on each spot as he told her sternly, “In this bedroom my word is law, little cat! On the battlefield we will fight side by side as equals but I will rule my home!”

Before she could even think to argue or agree, he lifted her from his lap and flipped her to her back, his hands gripping a sore ass cheek in each hand as he brought his mouth to her swollen pussy.

She cried out as he devoured her flesh, sucking and biting at her clit then licking down her slit and driving his tongue into her slick heat. His tongue worked in and out of her hard and fast then fluttered against a spot high inside her that had her on the verge of orgasm within what seemed like seconds. But before she went over the edge, he pulled back. “No. You don’t come without permission, little cat.”

Ryia glared him with a hiss of displeasure.

“Glare at me all you want, baby, but you aren’t allowed to come,” he told her with a smile, his lips glistening with her cream just before he lowered his head to suck her clit deep into his mouth while his hand spread her ass cheeks wide, his thumbs sliding in between them and pressing at either side of her quivering asshole.

She groaned and bowed her back as she looked nervously down her body where he fed on her pussy. “You can’t!” she panted.

Ryia moaned as she felt the lips around her clit turn up before he flicked it repeatedly with his tongue. His thumbs simultaneously pressed against the shy bud of her ass until they both sank past the tight ring of muscle guarding her most secret place.

She felt her eyes widen as the burning sting of her stretching muscles sent a zing of pleasure straight to her core. “Barrick!” Ryia cried out uncertainly.

“Come for me, Ryia!” he commanded as his thumbs sank deep and his tongue drove into her dripping pussy.

The intense climax exploded within her, stealing her breath as he worked his thumbs and tongue in and out of her in tandem, driving her pleasure even higher.

“Before we leave this room, I will own every part of you, little cat,” Barrick told her as he lifted her then lay back on the bed, arranging her with her pussy resting against his lips, facing his straining erection.

2019-03-16
Chris
Previous: Her Bossy Daddy by Adaline Raine
Next: Hunted and Claimed: An Alpha Shifter Romance by Delta James