His Caged Princess: A Dark Sci-Fi Romance by Marlee Wray 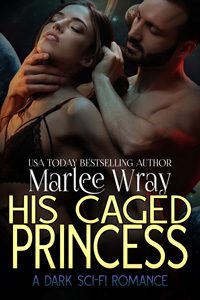 She was born a princess, but he will make her his pet.

When she runs away to avoid being married off to potential allies of the king, Princess Brandese is tracked down by Evston Calex, but the handsome, sternly sexy lord does not bring the wayward girl back immediately. By the time the blushing princess is returned to the palace, she has been stripped, intimately examined, and punished in such thorough and humiliating fashion that tears run down her face even as her helpless, shameful arousal drips down her bare thighs.

Since she is ruined for any other man, Brandese is given to Evston by order of the king, and her new husband quickly makes it clear that she will be both his wife and his pet. The headstrong princess is used to getting her own way, but Evston does not hesitate to make full use of her virgin body as he masters her, claiming her in every way possible and even sharing her if he feels so inclined. Before he is finished, his caged princess will know what it means to be truly tamed.

Publisher’s Note: His Caged Princess is a stand-alone book which is the third entry in the Owned and Shared series. It includes spankings, sexual scenes, intense and humiliating punishments, and strong D/s themes. If such material offends you, please don’t buy this book.

The transport lurched to a stop, and Evston hopped down.

“What are you doing?” she demanded. “No!” she shrieked as Rocurt lifted her and handed her down to him.

He carried her into the wooded area, pushed her over a fallen log, and jerked her pants down.

“Yes, exactly like this,” he said, peppering her pretty ass with hard spanks.

She began to cry almost immediately. He knew she was frustrated and overwhelmed. She’d taken desperate action, and it had backfired.

She squirmed and clenched. He went on spanking her until her bottom was bright red. His cock stiffened and throbbed at the sight of the well chastened beauty. He laid a hand on her flaming globe, soaking in the heat of her flesh.

Her noisy sobs faded, and she adjusted her position, opening her legs slightly wider. Hunger and lust pounded harder in his cock.

He admired her rebellions, but reining in the wild princess was his responsibility and the dark part of his soul would enjoy it. From the way she’d come up on her pretty toes, it was clear that being disciplined by his firm hand aroused her too.

He slipped a hand between her thighs and found her slippery and ready. He rubbed her clit for a several moments until she began to press her hips back and forth and strain toward his hand.

“Well?” she said in a raspy voice. “Will you prove you’re husband material? Or are you only good at spanking and teasing a girl?”

He shook his head at the churlish challenge. She apparently wanted and needed him to exert more control over her. He wasn’t sorry to hear it because she was a luscious offering.

His gaze settled on her, taking in the curve of her spine, the bright blush of her smooth ass, and the way her beautiful young body was draped over the dark bark. His desire snaked through him like a serpent. He gripped her buttocks and pulled them apart, exposing her pretty pink holes.

She drew in a sharp breath and moved restlessly.

“Spread your legs and lower your shoulders,” he said. When she didn’t immediately obey, he slapped her left cheek with stinging force. She whimpered and shifted position, making herself more open and ready to receive him.

Lust burned through him till it was a bright, unending need. He took out his cock and pressed the head between her soft, inviting lips.

“Please.” Her voice was ragged and soft.

He held her hip in one hand and plunged forward, driving into her sweet heat.

She cried out, but he knew every kind of crying there was, and it wasn’t the sort that was begging him to stop. She was soft and tight around his shaft, exactly the way he loved. She arched her back, raising her lovely little ass. There was a wantonness to her that he would relish.

He waited for a moment, letting her adjust to the feel of a man’s length stretching her channel.

“Yes, firebird. I’m your lord and master.” He pulled back and thrust deeper, bumping against her womb, causing her to gasp and brace herself. When she circled her hips slowly, he knew that despite her sniffling cries, she was ready for more.

2019-03-09
Chris
Previous: His to Protect by Shelly Douglas
Next: Her Bossy Daddy by Adaline Raine