His Captive Bride by April Vine 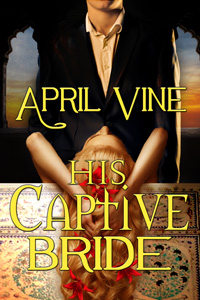 When twenty-two-year-old Haley Kent’s best friend decides to elope with the man she loves and avoid a marriage her parents have arranged for her, Hayley agrees to help. She travels to India and presents herself in disguise to Rajeev Yuvaraj, the handsome thirty-two-year-old billionaire her friend was supposed to marry. But when he discovers their ruse, the plan goes badly awry and Hayley quickly ends up as not only Rajeev’s wife but his prisoner as well.

Rajeev is no heartless tyrant, but when his new bride bites him, swears at him, and treats him with general disrespect, he decides that it is time to take her in hand. Soon enough, Hayley finds herself over her firm-handed husband’s knee for a hard spanking on her bare bottom, with more to come if her behavior makes it necessary. Yet despite his archaic views on how a wife should be kept in line, Hayley cannot resist the powerful need his dominance awakens within her. But if the opportunity to return home presents itself, will she cast aside her growing love for him, or is she truly ready to spend her life with the man who took her as his captive bride?

He withdrew his hands from behind his back and Haley’s mouth dried just as moisture slicked between her legs. He held some sort of a paddle—long handle, wide flat head, all in varnished wood. “Take off your clothes.”

She shuddered, not even once thinking to protest. She pulled off her t-shirt and pushed her skirt down.

Next came her bra and panties. She wanted to run and hide from his sight, but he kept her rooted and mesmerized as if she were under his spell. Did he like what he saw? He’d seen her naked before, but like this, she couldn’t conceal anything from him—or how badly she wanted him to deliver on all his promises.

Like a lethal Bengal tiger, he moved to a sofa in the room and sat, leaning back into the seat, his legs far apart.

“On your knees, hands behind your back.”

The fact that she dropped down as if she had done so all her life bothered her a bit. Everything inside her seemed to change, as if her axis had tilted in the right direction. What was going on with her?

He let her stay in that position for long drawn-out minutes, content to just look at her—not her body, but her eyes—and this time she couldn’t divert her gaze from his.

“Crawl to me, girl.” His soft husky voice undid her. She did as instructed and on her hands and knees crawled to him. “Closer,” he said, forcing her between his open legs. He leaned forward and cupped her head, coaxing until she laid her cheek on his cock while she remained on her hands and knees. She gasped as the hardness of his cock, deceptively masked by the softness of his trousers, met her cheek.

His glorious scent filled her, but her gaze couldn’t break away from the paddle he had placed on the right side of the sofa next to him. He tugged her hair away from the side of her face and tucked it around her so it fell over her left side. He slid his hand over her shoulders. She shivered and goosebumps flared over her skin. His cock twitched against her face as he massaged her flesh, his callused palm igniting a stronger fire inside her. Until he reached for his paddle…

2015-06-29
+admin
Previous: Taken and Tamed by Kallista Dane
Next: Tamed by the Buccaneer by Normandie Alleman