His Captive Kitten by Measha Stone 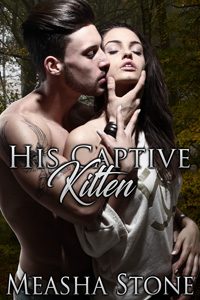 After her efforts to track down her missing mother nearly get her killed, twenty-seven-year-old Julie Sampson ends up on the run, hiding out in a cabin with police officer John Hamish. Though Julie is used to fending for herself, John demands her absolute obedience while she remains in his custody, and she quickly discovers that her gruff, infuriatingly sexy protector will not hesitate to strip her bare and take a leather strap to her naked bottom when she defies him.

Determined to teach Julie to submit for her own safety, John decides to treat her as his pet, and the beautiful, headstrong young woman soon finds herself sleeping in a cage, wearing nothing but a tail, and learning the hard way that her master will not hesitate to show a sassy little kitty a better use for her mouth.

But even when she is punished in ways more shameful than she would have thought possible, Julie cannot deny her body’s desperate need for John’s stern dominance. When he takes her in his arms and claims her hard and thoroughly, she is left sore, spent, and satisfied, but can she bring herself to trust that no matter what, her master will never abandon his kitten?

Publisher’s Note: His Captive Kitten is a stand-alone novel which is the fourth entry in the Owned and Protected series. It includes spankings, sexual scenes, intense and humiliating punishments, and strong D/s and pet play themes. If such material offends you, please don’t buy this book.

“This is the last warning I’ll give you. Relax right now and let the plug in. This tail is going in with or without your cooperation.” He gave her another smack to punctuate his statement.

Gripping the sides of the ottoman, she bore down and gave way to the intrusion.

His hand slipped beneath her, searching out and titillating her clitoris while he continued to push the plug past the point of comfort. “Good kitten. Good,” he praised as the plug finally made its way past her sphincter and the narrow end nestled in place. “That wasn’t too bad,” he decreed.

Julie pushed up from the ottoman; having lost his touch on her clit, she looked over her shoulder. He recapped the lube and put it on a small table beside the opened packaging.

Her ass burned from the initial insertion, but the sensation quickly morphed into a warm stretch that pushed desire through her body. Fur brushed against the back of her thigh when she moved, but she couldn’t see anything from her angle.

Climbing down from the ottoman, she looked between her legs. The tan tail she’d seen wrapped so nicely hung loose between her thighs. Heat rushed to her face as well as to her clit.

“Heel,” he directed, tapping two fingers to her ass.

Would it never end? She shook her head. He demanded too much.

She sank back on her heels, the tail bunching behind her and pushing on the plug. He bent down and reached between her spread thighs, pulling the fur forward. Looking down, she could see it lying between her legs.

His fist pressed upward on her chin until she met his gaze. “Very good.” He leaned down and pressed a quick, warm kiss to her lips, leaving her feeling tingling and unsatisfied. She’d endured the plug insertion; shouldn’t she get more than just a peck on the lips?

Before she could show him her displeasure, he plucked her nipples. She bowed her back, bringing her breasts further away from him.

“No, no, none of that. Now, let’s get this shirt off you.” In one quick yank, the shirt was up over her head and deposited on the ottoman. “Skirt too.” Another pull, this one fiercer, and the skirt ripped at the elastic band and continued to tear to the hem. He tossed it aside as well.

She watched the skirt land beside her shirt. The only item of clothing she had left.

Again, her nipples were pinched. She squealed when he twisted them as well.

“Shhh,” he chastised, but didn’t look her in the face. She noticed he was palming something. “Put your hands behind your back and arch. Give me your tits.”

“Why?” she asked, for a split second forgetting his dictate that she remain nonverbal. His gaze snapped to hers.

“That will cost you one, kitten. Now do as you’re told.”